While her classmates were joking around about which celebrities they would take to prom, King’s Fork High School senior swimmer Danielle Jennette said, “I’m going to take Ryan Lochte.”

She has since gone to impressive lengths trying to make a prom date with the 11-time U.S. Olympic medalist a reality.

Jennette was inspired by an interaction she had recently with Lochte on Twitter, the social networking website. Celebrities and their fans are among the users on the site, but this does not necessarily mean there is interaction with any given fan, particularly when someone like Lochte has more than a million followers on the site. 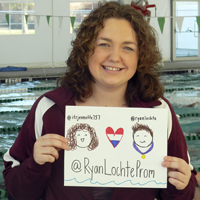 King’s Fork senior swimmer Danielle Jennette has launched an impressive social networking campaign to get five-time Olympic gold medalist Ryan Lochte to take her to the prom in May. In this picture, she holds one of many pieces of artwork created in the campaign, some of which were made by complete strangers who wanted to contribute after following her @RyanLochteProm Twitter account.

“Usually he doesn’t reply to anything, because, I guess, he’s really busy,” Jennette said. “He gets a lot of tweets. So, I was just like, ‘You wish me a happy birthday, it’ll make my birthday.’ He tweeted me back and then after that, I was just like, ‘OK, so it’s possible to communicate with him.’”

Jennette had never heard of Lochte until the 2008 Olympic Games in Beijing, but she noticed then that he was a good swimmer and was inspired by his drive and passion to win gold.

“And then, I got older, so I kind of understood the Olympics more,” she said. “So, watching him was just like, ‘Wow, it’s crazy that he can do this.’ If I had that kind of ability as a swimmer, that’d be awesome, but I’m still learning. And he swims almost the same events that I do.”

After her declaration about taking Lochte to the prom, she created an Internet campaign to promote the idea.

Jennette said her devotion to this endeavor is a bit out of character for her, but she initially did not think it would go anywhere.

“I don’t usually go to this extreme, but once it started, I thought it was just kind of going to die down, and then everybody started following and I was like, ‘Well, maybe this can actually happen,’” she said.

The Twitter account she created at www.twitter.com/RyanLochteprom has recently had as many as 174 followers, including total strangers who simply liked the idea.

To get people further involved, she decided to spread her campaign to YouTube by creating a video.

“I just asked everybody, ‘If you want to be in the video, give me a picture, and I’ll put it in the video,’” she said. “And I just got so many pictures back.”

The video features a series of 45 pieces of artwork requesting Lochte to take Jennette to the prom. Many photos feature someone holding up the art. Some of the photos and art are from Jennette’s friends.

“And then some of them are just from random people,” she said. “They don’t even know me. They just followed the (Twitter) account and made a picture.”

The video is available for viewing on YouTube with the title, “Ryan Lochte will you go to prom with me?” It has had more than 216 views.

Then, Jennette took another step.

“I did research on the charity that he sponsors,” she said.

One of them is the Parent Project Muscular Dystrophy, a charity leading the fight to end Duchenne, the most common fatal genetic disorder diagnosed in childhood.

The charity’s website gives visitors the option to create their own personalized page to raise money for PPMD. Jennette created one, linking to it on the Twitter account and the Facebook page she titled “Ryan Lochte will you go to prom with me?” She has raised more than $170.

“I figured, even if he didn’t go to prom with me, it’s still beneficial to that charity,” she said.

On the Facebook page, Jennette displays what appears to be an email from Shawn Zenga, a member of Lochte’s management team, addressed to her. It reads, “Thank you for your e-mail. I have seen your efforts on this and will definitely share it with Ryan.”

The prom will take place on May 24, 2013, and while most girls bold enough to do the asking would be happy to receive a “Yes,” Jennette will continue to pin her hopes on hearing Lochte’s trademark “Jeah!”