Nearly 60 workers at Lockheed Martin’s location on Harbour View Boulevard in Suffolk could lose their jobs by May 31 if the company loses an important contract, officials said this week.

Citing the notification requirements of the Worker Adjustment and Retraining Notification Act, Lockheed Martin has filed notice of a mass layoff involving 59 Hampton Roads workers, almost all of them at its Suffolk location on Harbour View Boulevard. 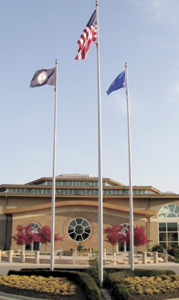 The Lockheed Martin Center for Innovation in Harbour View could be the site of nearly 60 layoffs in May if the company does not receive a renewed contract.

According to the Virginia Workforce Network, the notice was issued on March 28, and the layoff would take effect May 31.

However, Lockheed Martin spokesman Craig Vanbebber indicated in an email that the mass layoff is not assured.

“In the case of our technical services employees in Suffolk and Virginia Beach … the contract under which they are currently working is being re-competed by the customer,” Vanbebber wrote.

Fifty-eight of the workers are in Suffolk, and one works in Virginia Beach, Vanbebber wrote.

The potential mass layoff is not a result of sequestration, he stated, and Lockheed Martin could not say how confident it is of retaining the contract.

“We cannot speculate as to the outcome of the re-compete,” Vanbebber stated.

Earlier this year, another defense contractor, Cobham Composite Products, announced that about 50 full-time workers would be moved from a facility in Harbour View being shuttered this summer, to a larger facility in San Diego, Calif.

Lower-than-expected revenues for composite products were cited in that decision.

A previous Lockheed Martin mass layoff of 157 employees in Hampton Roads, announced in March 2012, affected about 18 employees at the company’s Center for Innovation on Harbour View Boulevard.

That event was linked to the 2011 disestablishment of U.S. Joint Forces Command, most of whose workers were subsequently retained in Joint and Coalition Warfighting, which moved into the former JFCOM’s largest building.

The Harbour View area of North Suffolk is often referred to as “Pentagon South,” but in the face of efforts to trim defense budgets and the sequester, many have called for the city to encourage diversification away from defense contractors and the military.

Governor Bob McDonnell is celebrating the final outcome of his push this legislative session to reform education, but a group... read more