No ‘Donut Showdown’ win for Suffolk 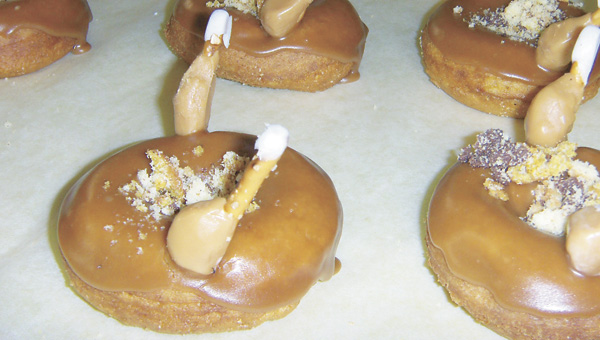 Reeva Luecke, owner of North Suffolk doughnut shop O’doodleDoo’s, snapped this photo of her turkey doughnut creations during her competition on the “Donut Showdown” show. She was eliminated in the first round.

Fans of North Suffolk doughnut shop O’doodleDoo’s might consider owner Reeva Luecke’s elimination in the first round of “Donut Showdown” a case of fowl play.

But despite the judges’ lack of enthusiasm for the turkey-themed treats Luecke made in the competition, she says it’s all gravy.

“We’re still proud to have gone there,” Luecke said. The episode of the cooking-challenge series first aired on America’s Cooking Channel Wednesday night.

Luecke traveled to Toronto last December to tape the episode, which had a “High School Cafeteria” theme. She was invited to participate and competed against other doughnut-makers from California and British Columbia. The Californian team ended up winning.

Luecke’s team made stuffed turkey doughnuts with turkey legs made of pretzel sticks on them for their first-round offering.

“We wanted to go out there and really show that we make crazy doughnuts,” Luecke said. “The judges were like, ‘Why would you put legs on a doughnut?’ Doughnuts are supposed to be fun and funny, but they did not want funny doughnuts at all.”

Despite the judges seeking something “a bit more sophisticated,” Luecke said the other contestants were “awesome and fun,” and she was privileged just to be able to go.

“We all felt like just to be asked to go, you already won,” she said. “(Losing) didn’t matter at the time. You feel good about it.”

Luecke said she was offered the opportunity to stay around and watch the rest of the taping if she wanted, but she and her team opted to visit Toronto restaurants instead.

She said in an interview last month the experience spoiled her previous enjoyment of cooking competition shows.

“I can’t watch any of those shows anymore,” she said. “Now I know what those contestants are going through, so it causes me anxiety.”

Even so, Luecke said she enjoyed the experience but is happy to be back serving all kinds of wacky doughnuts to customers at her Bridge Road shop.

“I feel like the luckiest person to have a fun dream as my business,” she said. “We’re really, really lucky people.”

Singer-songwriters Steve Williams, Sherrie Austin and Mike Aiken perform during the in-the-round concert at the 2011 festival. The segment this... read more