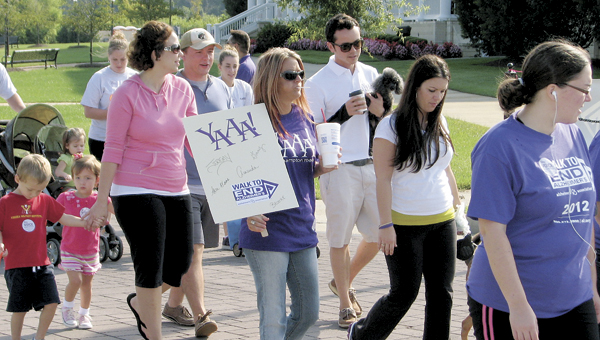 Walkers set off on the course at the 2012 Western Tidewater Walk to End Alzheimer’s at Constant’s Wharf. This year’s event is coming up this weekend and will also feature a promise garden ceremony and raffle ticket sales.

Like many people who will be in attendance at this weekend’s Western Tidewater Walk to End Alzheimer’s, Sarah Smith has a personal reason for standing up to fight against the disease.

For 16 years, Smith, the chair for the event, watched her grandmother suffer from the disease, which caused her death in May 2012.

“That was a hard thing to witness, so that’s what brought me to the Alzheimer’s Association,” Smith said. “If you’ve lost a loved one to the disease, (the walk) is a great way to connect to other families who know what you’ve experienced.”

The walk will begin at 10 a.m. Saturday at Constant’s Wharf, 110 E. Constance Road. Registration begins at 8:30, and people can sign up as late as the day of the event or ahead of time at www.alz.org/seva.

“It’s a great way to raise awareness and raise funds so that in the future, none of us will have to stand by as a loved one struggles with this disease,” Smith said. “Hopefully one day, we don’t have to have events like this.”

Kristy Wyngaarden, communications coordinator for the Alzheimer’s Association’s regional chapter, said the chapter has raised slightly more than half of its $47,470 goal for the walk so far.

“Alzheimer’s is the sixth leading cause of death, and it’s the only one of the top 10 that doesn’t have a way to slow its progression, a treatment or a cure,” she said. “People are living longer now, so we need to find a cure.”

The event also will include a promise garden ceremony before the one- to three-mile walk. Raffle tickets will be sold for $5 for the chance to win a 2012 Toyota Corolla S. The winning ticket will be drawn Nov. 11, and the winner does not have to be present.

About 200 people already are registered, and about 300 are expected, Wyngaarden said. Dogs are welcome if they are leashed and cleaned up after.

After the walk, folks hoping to eat lunch or dinner out can pick up a flier at the walk or download it from www.alz.org/seva and take it to any Ruby Tuesday’s in Hampton Roads, including both Suffolk locations, to give 20 percent of their order back to the Alzheimer’s Association.

The Alzheimer’s Association also is asking people to wear purple on Saturday in commemoration of worldwide Alzheimer’s Action Day and send photos of themselves wearing purple to infoseva@alz.org.

For more information on the walk, visit www.alz.org/seva.