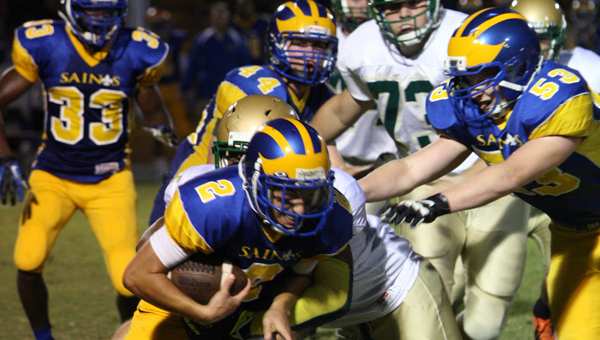 Most things seemed to be going according to plan for the Nansemond-Suffolk Academy Saints football team during the first half on Friday night at Arthur E. Jones Athletic Field.

While Bishop Sullivan Catholic High School scored first, the Saints responded with three straight touchdowns on the ground and took a commanding 24-6 lead with 5:45 to go in the second quarter.

But the Crusaders kept themselves in the game with their high-flying passing attack, setting the stage for a very different second half.

The Saints got the ball and, NSA head coach Lew Johnston said, “The interception on the halfback pass on the first series of the third quarter changed everything.”

Momentum shifted, and with 4:51 left to go in the third quarter the Crusaders held a lead they never relinquished.

Nansemond-Suffolk suffered its first loss of the season, 42-30.

Bishop Sullivan thrived on the arm and legs of junior quarterback Blake LaRussa. He was 17-for-34 through the air, throwing for 278 yards and three touchdowns, and he also rushed for 34 yards and two touchdowns.

The Saints led 30-14 with 3:27 left in the second, and then LaRussa engineered the offense into producing 28 unanswered points for the duration of the game, prompting Johnston to say, “He ran that thing as well as I’ve ever seen.”

“We didn’t put the stop on him as much as we needed to,” he said.

The Saints tried to respond, but senior quarterback Jackson DeMello was again intercepted.

Bishop Sullivan was stopped on its next possession, however, and forced to punt.

“We played hard, we didn’t give up,” Johnston said, alluding to the fatigue his players had to fight through. “The defense was on the field an exorbitant amount of time.”

On its next two possessions, NSA’s powerful offense could not produce, though, even being forced to punt deep within its own end zone.

Saints penalties helped put the Crusaders in great position for their final score, but NSA still had a chance in a two-possession ball game with 7:48 left.

However, because of limited time, Nansemond-Suffolk was forced to go to the air and DeMello had little room and time to throw, throwing two more interceptions to seal the final score.

Johnston did not list it as an excuse, but acknowledged the absence of first team all-state senior center Will DeLuca logically had an effect on the game. DeLuca, who was suspended for unnecessary roughness last week against Norfolk Christian High School, weighs in at around 225 pounds while his replacement, junior Camden Sutton, weighs 185.

NSA was also missing senior offensive tackle Lee Willis due to injury, but Johnston said junior Jack Johnson had already been splitting time at that position, so it was not a big adjustment.

Illustrating just how dominant the Saints were in the first half, the offense generated 342 yards for the game, including 266 on the ground. The loss wasted another strong performance from junior fullback David Gough, who had 163 yards and two touchdowns on 14 carries.

In summing up his team’s sudden lack of offensive production in the second half, Johnston credited Bishop Sullivan.

“They played better defense in the second half. We just didn’t get after it like we needed to.”

But in terms of explaining why everything shifted the way it did from one half to the next, Johnston said, “If I had the answer to that, I’d be making millions on the lecture circuit.”