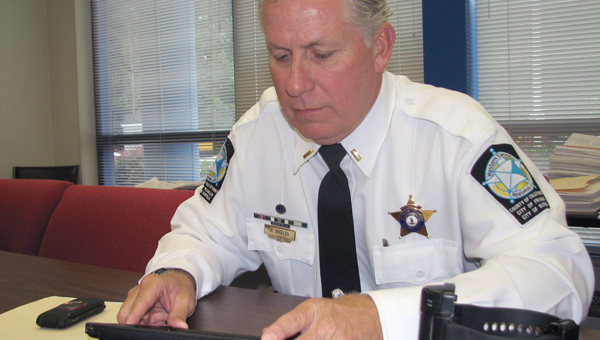 Through his computer, Lt. Michael Whalen can monitor the whereabouts of a handful of people at all times, mandate when and why they leave their house, track their route to work and even send them messages — all through special devices attached to the subjects’ bodies.

It sounds a little bit like “1984,” but for those attached to the tracking devices, the program actually gives them more freedom and privacy, rather than less.

Whalen is the work program supervisor at the Western Tidewater Regional Jail, and the 18 or so people currently under his 24-hour surveillance are in the jail’s new electronic monitoring program, which began in June.

The program allows certain nonviolent offenders to serve short sentences or await trial outside the jail, while still being able to work and be at home with their families. It also reduces the workload for jail officers and saves taxpayers money, because the jail does not have to pay to feed, house, clothe and provide medical care to offenders while they are on the program.

“It helps lower the expenses,” Whalen said. “We’ve had a lot of good responses to the program.”

Offenders who are allowed onto the program usually are charged with failure to pay child support, minor property crimes or traffic offenses like driving under the influence or driving on a suspended license multiple times.

“Someone that comes in on a minimum-type charge that is employed or perhaps is a student, it allows them to be at home and still be with their family,” Whalen said. “It doesn’t break up the nucleus of the family.”

No violent offenders, burglars, drug distributors, sex offenders or people with similar charges are allowed into the program, Whalen said. Though the jail has unilateral authority, outside of those parameters, to decide whom to put on the program, Superintendent William C. Smith said he checks with the prosecuting attorneys to make sure they don’t have a problem with the choices. A handful of current participants in the program even were court-ordered into it.

Many participants would otherwise be able to serve their sentences on weekends, Whalen said, but the influx of weekenders arriving on Friday evenings previously put a strain on jail staff to process them. Now the number of weekenders has been reduced to a handful.

The jail leases the ankle bracelets that contain the tracking device and a speaker that transmits messages from jail officers. It then requires offenders to pay $20 per day to cover the lease fee and supervision costs, as well as a one-time $100 administrative fee.

Using his desktop computer or an iPad, Whalen can check the location of any offender on the program 24 hours a day. He can see where a person has been and gets an alert if the offender deviates from his established route to work or, for example, goes into a known drug area. He can send pre-recorded messages through the speaker on the device, telling the offender, for example, to call him immediately or report to the jail.

Overnight staff at the jail monitor the program’s participants while Whalen is off duty. Officers also go out and check behind participants to ensure requested deviations from their normal route — for example, to leave their children with a different babysitter — were for the stated purpose, Whalen said.

Participants have to charge their unit for about an hour per day — while it’s still on their ankle. The tracking device could theoretically be cut off the offender’s ankle, “but you’re going to have felony escape charges” if you do, Whalen said.

Even though the program allows more freedom, it still sends a strong message to minor offenders — particularly those that have to explain what the device is to their children, Whalen said.

“The ones that I’ve talked to, the fact that they’re inside their house looking out the window knowing they can’t go outside … it’s different than sitting in the jail looking at the jail,” he said.