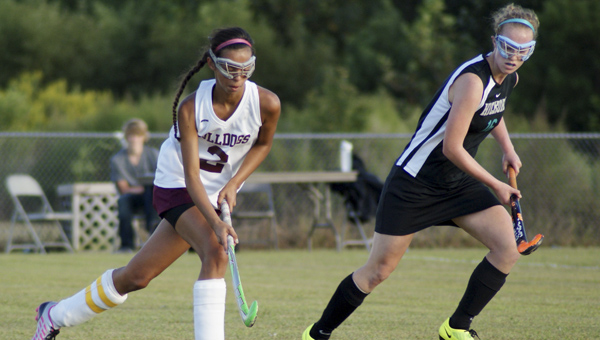 King’s Fork High School junior Randi Fiel advances the ball against visiting Hickory High School on Monday. The Lady Bulldogs started with intensity, but then lost it as the game went on, falling 5-0. (Caroline LaMagna photo )

“I still see more potential in my girls,” she said. “I don’t think we’re still playing our best game yet.”

The beginning of the game looked good for Nansemond River, as sophomore midfielder Jaclyn Mounie scored within the first seven minutes of the game.

“We came out with intensity in the first 10 to 15 minutes, and I think the girls got comfortable,” Mowry said.

A key sticking point for the coach was the lack of scoring.

“We’ve got to put more goals on the board,” she said.

The Lady Bruins knotted the game up very early in the second half, before sophomore midfielder/back KateLynn Hodgkiss scored the go-ahead goal with only four minutes remaining in the game.

Senior back Madison Janek and senior forward Kimberly Bates each had assists.

For Lakeland, the tone of the game was set early against host Deep Creek High School.

She cited the 9-1 victory against the Lady Hornets as a clear continuation of the progression her team has shown in its last two games against Hickory High School and Western Branch High School.

Worley changed players around after jumping out to an early lead, barring her team from scoring and asking it to work on passing. After a defensive change-up, Deep Creek got one through, but Worley felt there was no excuse given her senior-laden team.

“I think they just took it for granted,” she said of the shut out.

King’s Fork faced off at home against Hickory on Monday and ended up falling 5-0.

King’s Fork kept it close early, trailing only 2-0 at the half.

Van der Linden said for the first 15 minutes of the game, “we actually played really well, and then I don’t know what happened. They just kind of tapered off.”

The Lady Hawks scored their final goal with about two seconds remaining.

Van der Linden said intensity and desire was lacking, but it was a matter of degrees.

“They’re all wanting to win at different levels, so we were kind of all over the place,” she said.

The Lady Hawks garnered 24 penalty corners on offense compared to the Lady Bulldogs’ one. Despite those lopsided numbers, King’s Fork did have its opportunities.

“We would get it past the 50, but it wouldn’t stay there for long,” Van der Linden said.

In practice on Tuesday, she said the team worked to shore up its weaknesses displayed against Hickory, focusing on offense, making quick, smart passes, and transitioning well from defense to offense.