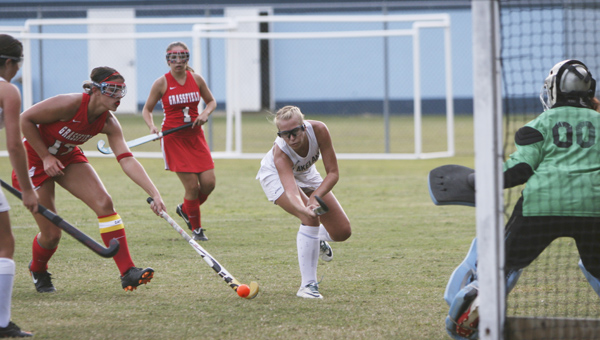 Lakeland High School senior midfielder Kristen Vick eyes the back corner of the net against visiting Grassfield High School on Wednesday. Vick had a goal and two assists in the Lady Cavaliers’ strong 7-1 victory.

The Lakeland High School field hockey team had started executing the fundamentals to coach Tara Worley’s satisfaction on turf recently, and that success carried over to their home grass on Wednesday.

The Lady Cavaliers ended the game with 6:09 remaining when a goal by senior forward Jessie Cox instituted the mercy rule for a 7-1 final score.

She said the Lady Grizzlies like to play the ball long with big hits, but her girls were able to stop most of them in what was a very physical game with one of the better teams in the Southeastern District.

“This was a challenge, and we knew it would be, but we really fought through,” senior forward/midfielder Alexis Albright.

“It was kind of what we needed,” senior back Kasey Smith said. “They were a good team, and they really tested us.”

While one of Grassfield’s big hits got through for a score, Worley felt good about her team’s play throughout the game. The score was only 3-1 at halftime, but Worley said, “I felt like we were controlling the game.”

One sign of this was the 21-to-1 advantage in penalty corners the Lady Cavaliers enjoyed.

Lakeland also had 17 shots on goal to Grassfield’s three.

“She’s looking to score, but she doesn’t care if it’s her or somebody else,” Worley said.

Senior midfielder Kristen Vick scored once and had two assists, and Smith had a goal and an assist. The others goals were scored by senior forward Kiersten King, senior midfielder Jamee Albright and Cox.