Suffolk schools on the road

The Braves (1-2, 1-1) got their first win of the season last Friday against Lakeland High School, while the Warriors (0-3, 0-2) will continue to hunt for theirs. They are coming off a 27-24 road loss to Great Bridge High School. 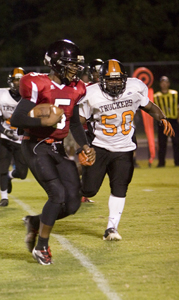 Nansemond River High School junior quarterback Jermaal Wells and the Warriors offense will aim to attack host Indian River High School both on the ground and through the air. Warriors head coach Tracey Parker is looking for his team to put together its first complete game of the season.

NR head coach Tracey Parker shared the approach he has taken with his players to keep discouragement at bay.

“It’s a young season,” he said. “We’re three games in. Granted we’re not where we wanted to be, but we can’t allow that to influence how we play,” particularly in the next few games.

Preparing for the Braves, Parker said, “They’ve got a good quarterback-running back tandem. They’re two very good athletes. We’re going to have to contain both of them.”

However, Nansemond River is as healthy as it has been so far this season, which should help.

The Bulldogs (2-1, 1-1) are coming off an emotional 35-28 road loss to Grassfield High School, but KF head coach Joe Jones said his players “know first and foremost what we’ve got to take from last week are the positives.”

He said his team played well enough defensively to win, and offensively produced more than 300 yards. The Grizzlies came up big on special teams, however, so the Bulldogs have been putting in extra practice time on that facet of the game in preparation for Great Bridge.

“We’ve got to play with a chip on our shoulder, that we let one get away,” Jones said.

The Wildcats (2-1, 2-0) got its two wins from King’s Fork’s cross-town rivals. “They’re looking for the trifecta against Suffolk,” Jones said.

He noted the up-tempo offense the Wildcats have employed for years and said his team must be able to match the pace, tackle well and disguise their coverages.

A few Bulldogs are still nicked up, but senior Jerrell Hicks will be back to bolster the defensive line after missing last week.

The Cavaliers (0-3, 0-2) are a young team, struggling to gain its footing, but now must hit the road to play a perennial Division 6 state champion contender.

“Pretty much we’ve just got to focus,” Lakeland High School head coach Bryan Potts said. “We have to play a darn near perfect game to be in the ball game. It’s going to be tough.”

He aimed to inspire the Cavs by telling them about last year’s double-overtime thriller between the Tigers and King’s Fork High School, when he coached for the Bulldogs.

“Offensively, we’re going to slow the game down, because we know they can score in bunches,” Potts said.

While the Tigers have athletes who can receive and run the ball, Potts pointed to the Tigers’ young, less-athletic quarterback as someone Lakeland will try to pressure and make uncomfortable all night.

Potts will still be missing some key players due to injury.

“We’re not going to use that as an excuse,” he said.

Nansemond-Suffolk’s run for a 2013 state title took an unexpected turn last week with a 42-30 loss at home to Bishop Sullivan Catholic High School. Now, the Saints (3-1, 1-1) must get back on track.

“We called this ‘Bounce Back Week,’” NSA head coach Lew Johnston said. He said the coaches tried to tell the players “our whole season is not wrapped up in one game.”

He said the goal to play for a state title remains. The next stop on that road involves a trip to Charlottesville to play St. Anne’s-Belfield School, a team Nansemond-Suffolk has not faced since 2006, according to MaxPreps.com.

Johnston said this opponent has an offense similar in style to Bishop Sullivan but lacking the same caliber of athletes.

Still, NSA can take lessons from last week into the game to put pressure on junior quarterback Lee Parkhill.

Nansemond-Suffolk will get senior center Will DeLuca back from suspension, but both offensive tackles are now out. Junior Shay Wood is sidelined by a leg injury and senior Lee Willis has back spasms.

All of the local football games will kick off at 7 tonight.