Walmart closure due to HVAC problem 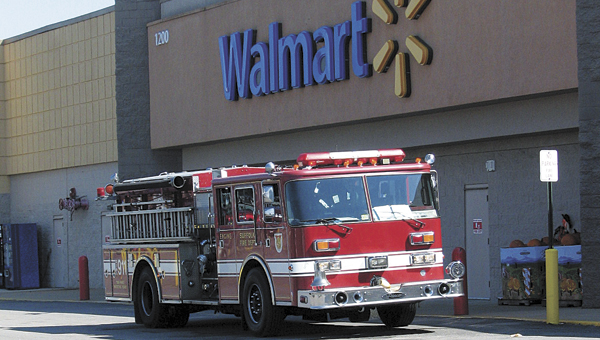 The North Main Street Walmart was closed for most of Tuesday after firefighters detected carbon monoxide in the building.

The North Main Street Walmart was closed most of the day Tuesday after a customer reported a strong smell of natural gas inside the store, and firefighters subsequently detected carbon monoxide in the building.

The report was received at 8:53 a.m., and Suffolk Fire and Rescue units detected carbon monoxide inside the store with their gas meters, city spokeswoman Diana Klink said. Virginia Natural Gas was contacted and secured the gas lines to the building.

“I heard an announcement over the PA system asking everybody to leave the store,” said Carole O’Keeffe, who went to the store to get a prescription. Fire trucks and other emergency vehicles were already there when she arrived, she said.

“It was obvious something was going on.”

She said an employee in the vision store told her before the evacuation that there was a carbon monoxide problem.

City staff blocked off entrances to the Walmart parking lot, which slowed traffic on North Main Street. Customers left the property, but employees stood in the parking lot in a group.

Walmart spokeswoman Ashley Hardie said the evacuation was done “out of an abundance of caution.”

“We’re currently working with the fire department to ensure this store is safe before we reopen,” Hardie said Tuesday afternoon.

By around 7:30 p.m., the store was reopened, an employee who answered the phone said.

Several problems with the heating, ventilation and air conditioning system were detected after an extensive investigation by Suffolk Fire and Rescue, several contractors and Walmart workers. In addition, a Virginia Natural Gas test indicated a gas leak.

Repairs are expected to be completed Wednesday. Until that time, the deli and bakery will be closed because there is no natural gas to the building.