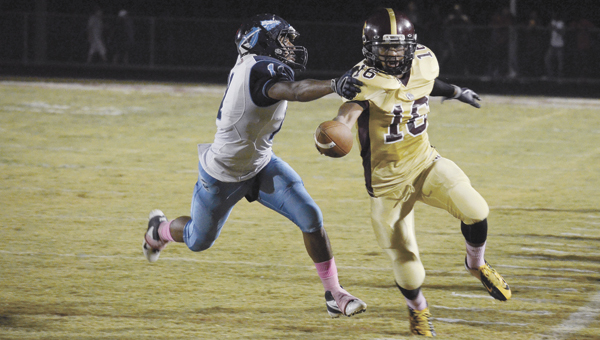 Wethington set the tone for the evening less than 30 seconds into the game with a 68-yard touchdown run.

The Braves proved to be scrappy early, however, responding with 27-yard touchdown pass to knot the game up, 7-7, at the beginning of the second quarter.

But Bulldogs head coach Joe Jones had said his team spent time working on developing its passing game during the week, and it showed on Friday. Senior quarterback Uriah Adams connected with junior slotback Duke Santora for a 9-yard touchdown pass to return the lead to King’s Fork.

He took the ensuing kickoff 86 yards for a score.

The Bulldogs got the ball back and with a just over a minute left before halftime, Adams found senior wide receiver Jonathan Holloway for a 14-yard touchdown to make it 28-14 at halftime.

Wethington dominated the second half with three more touchdown runs of 43, two and 35 yards. He finished the game with another 200-yard performance, carrying the ball 16 times for four touchdowns and 249 of King’s Fork’s 264 yards rushing.

Adams threw the ball six times with five completions for 77 yards and the two scoring passes.