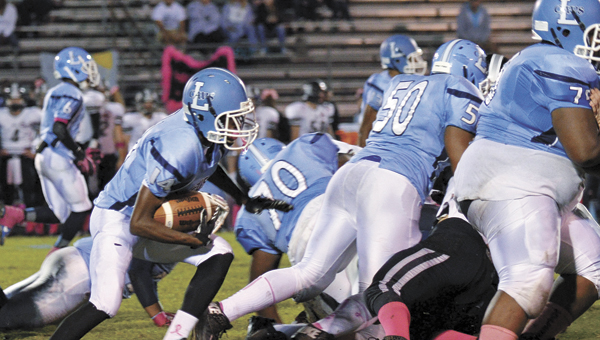 He would have preferred the wait for his first victory been shorter, but it was sweet nonetheless.

On the occasion of homecoming night, the Cavaliers brought home its inaugural win of the season with a 17-0 shutout of the visitors from Hickory High School.

Afterward, Potts described what the win meant to him. “It’s great. I’m still trying to find the words.”

The desire had only been mounting among his players. He said a couple players spoke up in one of the classes he teaches. “Coach, we really want to get that first win for you,” they said.

“They came back Tuesday and they were just ready to go,” Potts said.

He said the players also gained their focus from playing for other people, namely the large crowd that turned out for homecoming.

“Seeing how many guys were coming back and cheering, despite the 0-6 record, they saw a strong support from the alumni,” Potts said.

The score was 0-0 at halftime, but sophomore fullback Jaquan Yulee helped put Lakeland on the board in the third quarter with a 2-yard touchdown run.

Later, senior kicker Austin Brown contributed a field goal from about 35 yards out.

In the fourth quarter, junior defensive back/running back Ja’Juan Walker ensured there would be no Hawks comeback. He snagged an interception and on the very next play ran 80 yards for a touchdown.

The Cavs came into the game with the plan to spread it out and pass, as well as run. However, after early success on the ground, Lakeland stuck with it and accrued more than 300 yards rushing.

Lakeland was not perfect, however. Potts said the first half illustrated the Cavaliers still have things to work on. Two trips to the red zone with nothing to show for it and costly penalties that killed drives were reminders of that.

But it did not overshadow the great relief coach and players felt getting the first win out of the way.

Potts said the first thing he did after the game was gather the team. “I pointed to the scoreboard and I said, ‘We could get used to that.’”

His players ensured he got the full treatment a coach receives after a big win.

“It came complete with the Gatorade bath after the game and everything,” he said. “It’s something that I’ll never forget.”