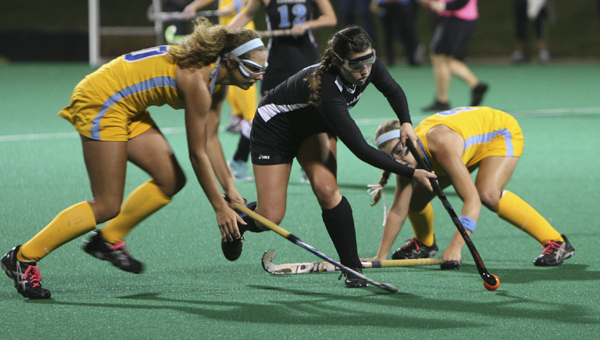 Lakeland High School’s field hockey team knew what it was getting itself into Monday evening at the U.S. Field Hockey National Training Center.

The Lady Cavaliers faced off against First Colonial High School, the two-time defending Group AAA state champions, which had not lost a game since 2011. They are listed as the No. 2 team in the nation by www.TopoftheCircle.com.

However, Lakeland knocked the team off its pedestal Monday night in a 4-3 overtime defeat.

Down 2-0 at halftime, Lakeland came back and ultimately forced sudden-death overtime with the game knotted, 3-3. The Lady Patriots dominated possession through much of the game, but the Lady Cavs had some opportunities, and one came with less than 10 minutes remaining in the extra period. 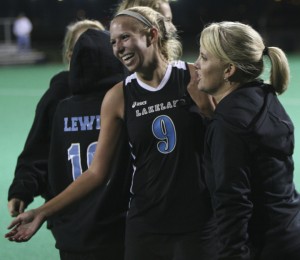 When senior midfielder Kristen Vick’s shot worked its way through the defense and found the back of First Colonial’s goal, the Lady Cavaliers rested a case for being the No. 1 team in Virginia.

Senior forward Summer Parker, who scored twice, summed up the significance of the win to her and the team.

“It means everything,” she said. “I think it gives the whole team an idea of where we actually stand.”

Neither Lakeland’s players nor coach said anything about being the best in the state as a result of the win, but they made clear their regard for the Lady Patriots, who carried a 50-plus game win streak into the contest.

The major complaint Worley had about the Virginia High School League’s realignment was that it could prevent them from playing the best teams in the post-season.

She said each year she wants to be beat the best, and she admitted going into Monday’s game, she felt First Colonial represented Virginia’s best. Parker revealed her players felt similarly.

“I knew it was going to be a tough game, and I had an idea that they were No. 1,” Parker said. “I think the whole team did.”

Reflecting on the game Tuesday, Worley said, “Last night was two great teams just battling it out, and I honestly feel like the game could have gone either way.”

The game cast both teams in a strange light. Members of Lakeland’s senior class huddled inside their own goal, preparing to defend against a penalty corner, was a rare sight indeed. The same had to have been true for the Lady Patriots.

“We hadn’t played a team that matched our speed until last night,” Worley said. “Honestly, I think in the first half, that shook us a little.”

When halftime arrived along with a 2-0 deficit, Worley was disappointed and frustrated. She said her team was allowing First Colonial to dictate the terms of the match.

“We were definitely a different team between the first half and second half,” Worley said.

With a little less than 19 minutes left in regulation, Lakeland’s all-time leading goal-scorer went to work.

“I remember I passed it to Alexis (Albright), she was on the right, and then she passed it back in to me, and I lifted it over the goalie,” Parker said. “I think it gave us more confidence that we were still in the game.”

About seven minutes later, the Lady Cavs were up one player on First Colonial after a penalty. Lakeland fired a shot on goal, and the foot of a Lady Patriots defender was the only thing preventing the goal, prompting an automatic penalty stroke.

Parker had a good idea the task would fall to her and admitted, “I was really nervous.” She made it look effortless, however, tying the game up 2-2.

For the game, First Colonial had 11 penalty corners to Lakeland’s two and 14 shots on goal to Lakeland’s four. With 1:44 left in regulation, Alexis Albright made those numbers seem irrelevant.

“It was a corner that went to Kasey (Smith) and then to Kristen (Vick), and Kristen took the shot,” Albright said. “I dove for it because it was out of my reach.”

It went off her stick over the goalie’s mitt, and Lakeland led 3-2.

“When that happened, it was really exciting,” Albright said. “We were like, ‘Wow, we can do this.’”

But First Colonial demonstrated why it is so unfamiliar with losing, tying the game with 28 seconds to go.

In the 7-on-7 overtime session, Lakeland played down a player for nearly four minutes due to a yellow card, but kept FC at bay.

Lakeland junior goalkeeper Erin Bradshaw had 11 saves for the game.

Worley emphatically told Vick she needed to dismiss her fatigue and make a run. “When she opens up with speed, few people can stay with her,” Worley said.

Vick said, “It really pumped me up.”

She dribbled the ball into the circle, fired the shot, and the game was won.

“It was the best feeling,” Vick said.

Worley said, “When it came down to the end of the game, we took care of business before they did.”