The sequel to an epic 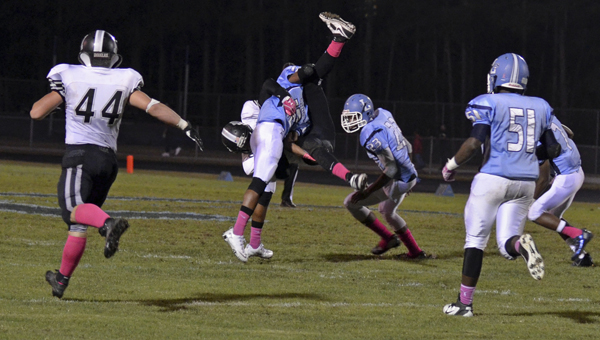 Lakeland High School junior defensive back Convon’Tra Revell makes a mid-air tackle last week against Hickory High School in the Cavaliers’ first win of 2013. The Cavs’ defense will need to be quick to the ball tonight against visiting Western Branch High School.

But King’s Fork (6-1, 5-1) could provide a challenge this week, as it did last year. The Bulldogs took them to the brink in 2012 at Oscar Smith, losing in double overtime. But KF head coach Joe Jones said, “Last year’s game was last year’s game. We had an opportunity to knock them off; we didn’t finish it.”

He said, “Our big motivator in the off-season was we’ve got to finish games,” and he feels his team has done a good job of that this year.

That group, led by senior Virginia Tech commit Jaylen Bradshaw, will help ensure the Bulldogs have their hands full.

Defensively, the Tigers have been stellar, as well, giving up only 35 points all season. For the Bulldogs to be successful offensively, they will need to account for senior defensive lineman and University of Virginia commit Andrew Brown.

“He does a great job,” Jones said. “We’ve worked hard this week to do some things to neutralize him.”

The Cavaliers (1-6, 1-5) are enjoying their first bit of momentum this season after last week’s victory. On Thursday morning, Lakeland head coach Bryan Potts said, “We are very excited about our first win, so we’re still riding that emotional high, and hopefully that can translate to us performing well tomorrow night.”

Potts said while the Bruins (6-1, 5-1) are not as talented as last season, they are still having similar success.

What makes the Western Branch offense so difficult to stop is its cramped formation, abundance of blockers and ability to mask the football’s location, Potts said.

“When you’ve got all that traffic moving, you’ve got to find the ball very quickly, and they make it difficult,” Potts said.

He said there is no one player to key on. The Cavs will focus on not beating themselves with penalties, and the setting should help the effort.

“Our guys seem to be more motivated by the home crowd,” Potts said.

Lakeland will be without senior wideout Gregory Rountree, who should return next week from a high ankle sprain.

Saints head coach Lew Johnston said Trinity Episcopal (2-6) is “a good football team when they are healthy, but they’ve been banged up.”

Among the Titans’ sidelined players has been senior offensive/defensive star Abraham Ferrell-Logan. It is unclear whether he will play today or not, but Johnston said NSA is preparing as if he will.

The Titans are currently running a pistol version of the Delaware Wing-T offense. Defensively, this formation makes it difficult to know which direction the run will come from, since the running back lines up directly behind the quarterback. But Trinity Episcopal will also mix in the pass.

Injuries are testing the Saints’ depth at linebacker. After senior Jack Russell was lost for the season, junior Camden Sutton has gone out with a high ankle sprain, sophomore kicker/linebacker Ben Anderson is out with a stress fracture, freshman Keshaun Moore is doubtful with concussion symptoms and sophomore Cole Christiansen is questionable with a sinus infection.

“We didn’t play our best football,” NR head coach Tracey Parker said. “We put the ball on the ground.”

The problems extended to other fundamentals, too. “Defensively, we didn’t tackle well,” Parker said.

Rather than ponder the loss for 24 hours, the coach said the Warriors wiped it from their minds that night. They started fresh this week preparing for the Hawks (2-5, 2-4).

After weather delays only gave Nansemond River four days to prepare for the Bulldogs, Parker said, “It feels good to have a full week to prepare.”

He said the Warriors match up pretty well with Hickory, which is sizable up front. That line helps pave the way for a fullback who has piled up yardage for the Hawks, so Parker said, “We’ve got to play fast and play physical.”

All of the public school games will begin at 7.