The Lady Bulldogs were not accustomed to playing in the Southeastern District tournament, which most recently only accepted the top six teams. The newly formed conferences give everyone a shot to take the tournament stage. 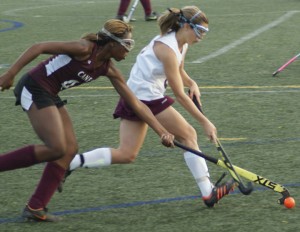 King’s Fork, which had already achieved a winning season, did not let its chance go to waste. It pulled away in the second half to defeat Heritage High School 4-0 in the opening round of the Ironclad Conference tournament at Christopher Newport University.

Lady Bulldogs head coach Courtney Van der Linden was happy with the win but is trying to help her team acclimate to an intense, post-season mindset.

“I’m not sure if they understand the severity of each game because they’ve never been in this situation before,” she said.

The team’s intensity was on display early, as senior Naajia Lyons scored about three minutes into the game off an assist by junior Randi Fiel. The tempo then sagged until three quick goals in the second half.

Senior Holly Wilson scored back-to-back goals with a little more than 15 minutes left in the game, one on an assist by junior Rachel Gist and one unassisted. Fiel scored the game’s final goal, assisted by freshman Lauren Park.

Van der Linden held up Fiel’s performance on Tuesday as an example.

“She didn’t slow down her play at all,” the coach said. “She continued to play consistently, and that’s what we needed from everybody.”

Wilson did not play the entire game, but she was a highlight when she was in “because she brought some intensity to the game,” Van der Linden said.

Both teams had their share of penalty corners, King’s Fork with six and Heritage with four, but the Lady Bulldogs held a 16-1 advantage in shots on goal.

The win sets up a Suffolk showdown this evening. By virtue of being the No. 2 seed, Nansemond River High School (10-5) had a first-round bye, but it will now face King’s Fork (10-5) with a lot on the line. The winner will qualify for regional competition and advance to the conference championship game on Friday.

For Lady Warriors head coach Ali Mowry, everything this year has been building to this next objective.

“We’ve been in this same spot for the past two years and just came up shy of it, so of course our goal for the year was to make it to regionals,” she said.

Grassfield High School was the one standing in the way at districts in 2011 and 2012, but with the conference set-up, this time it is Nansemond River’s improving cross-town foe.

“Just because we’ve played them before and beat them before, the girls aren’t taking anything for granted,” Mowry said.

The game is scheduled for 7:45 p.m. at Christopher Newport University.