To be eligible for the award, an applicant must be a senior, have a 3.0 grade point average or better, participate in at least one school-sponsored sport and be a leader in school and the community, serving as a role model for underclassmen. 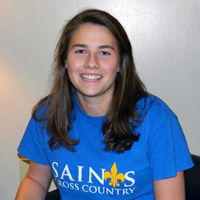 Mears is used to receiving awards for her play on the softball field, but her status as state finalist illustrates her abilities lie in multiple areas.

She enjoys good grades and also participates in basketball and cross country, but her record of volunteering is significant, as well.

She has volunteered for the Church of St. Thérèse of Lisieux in Chesapeake, serving the homeless. She went on a mission trip to Haiti last spring break.

The past couple of summers she has worked at a children’s fishing clinic put on by the Rotary Club of Newport News, and she has also served as a counselor at NSA coach Kim Aston’s summer basketball camp.

One male and one female state winner from each state will be named on Monday.

Twelve national finalists will be chosen from the field of state winners and go on to compete for the title of national winner on Dec. 13 in New York City.