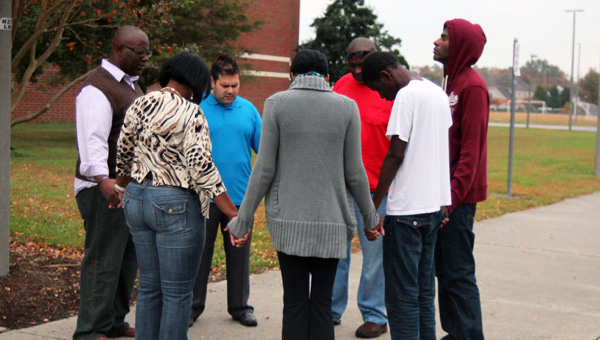 The organizer of a prayer event at Nansemond River High School Saturday had hoped for a larger turnout, but she believes the intimate vigil will still have a positive impact on the lives of students and teachers.

Nycholle Gater, a parishioner at Calvary Community Church in Hampton and a Carrollton resident, said the event was part of series of monthly school prayer vigils.

“It was my God assignment,” she said, explaining events have also been held at Smithfield High, King’s Fork High and Elephant’s Fork Elementary.

Standing in a circle, they voiced prayers that, Gater said, among other things were intended to prevent tragedy from touching the school community.

“I think more often than not we tend to look at issues and say, ‘Thank God those weren’t my kids,’” she said.

But everyone is connected, she said, and thus all are affected by incidents such as school shootings.

“We are like a quilt; we are all intricately woven together,” she said.

Before each school prayer event, Gater said she visits the campus during the seven preceding days to “break down the barriers.”

“I walk around and pray for the protection of our children, and I do that daily up until the event,” she said.

“I came here yesterday in the rain and walked around praying and listening to Christian music.”

Gater said she wants to bring communities together in prayer, and connect congregants from different churches.

According to Gater, the turnout at Nansemond River could have been better. “It’s usually a lot more people,” she said.