The Lakeland High School girls’ volleyball team showed why it is the No. 3 seed as it faced sixth-seeded Phoebus High School Monday night to begin the Ironclad Conference 18 tournament. 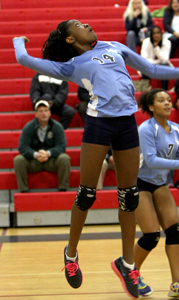 “I felt like Phoebus was going to come out and be scrappy, but I felt confident in my team,” Lakeland head coach Tarijuana Napoleon said after the match.

Her team pulled away from the Lady Phantoms with a superb service game. Napoleon said Lakeland only had two or three service errors for the entire match. “I prefer none, but I’ll take two or three,” she said.

In one stretch during the third set, senior Kristen Walden took a close game and turned it into a 16-5 Lakeland rout, scoring the last three points of her impressive service run on aces.

For the match, she had five aces and several teammates who also served well. Senior Logan Reid had six aces to go with 12 kills.

Walden also helped contribute to an offense which featured some well-placed kills, particularly in the back corners of the opponent’s court. Napoleon said Walden uses her experience as a tennis player, putting a spin on the ball which causes it to drop sharply at the end of its arc in the air.

“She does a great job with it,” the coach said.

Walden had seven kills and sophomore DJannay Patterson had six.

The Lady Cavaliers played well despite not being at 100 percent. Senior libero Sarah Bowyer, a leader on the team, was sidelined due to illness, but was able to be at the match and support the team from the bench.

Napoleon said, “We definitely missed her out there,” but some freshmen were able to step up in her absence. She hopes to have Bowyer back soon.

Monday’s win improves the Lady Cavs to 9-12 on the season, one year removed from a winless season under the old alignment.

The win also sets up a cross-town showdown with No. 2 King’s Fork High School in the conference semifinals. The two teams play 5 p.m. tonight at Nansemond River High School.