It was Suffolk vs. Suffolk in the semifinals of the Ironclad Conference 18 girls’ volleyball tournament Wednesday night. No. 2 King’s Fork High School closed out No. 3 Lakeland High School in four sets, 18-25, 25-23, 25-21, 25-23, at Nansemond River High School.

With the win, the Lady Bulldogs advance to the tournament championship game and also qualify for regional competition. It was the end of the line for Lakeland. 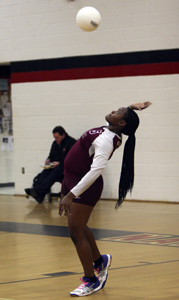 King’s Fork head coach Sarah Porter told her players to be on guard because the Lady Cavaliers would play like they were not ready for their season to be over.

“That was proven because they took that first game from us,” Porter said.

After that, though, she said, “I think we woke up.”

Senior Erin Banks had a strong night for King’s Fork with nine assists, seven aces and five kills. When the Lady Bulldogs fell behind, she was clutch.

“She brought us back a lot of times with her serve,” Porter said. “When we needed her, she definitely stepped up.”

Porter also highlighted freshman libero Cydney Nichols, who is not the team’s normal libero, but came in on Wednesday for three games and contributed with solid passing and defense.

Aside from a cross-city rivalry, the match held another significant connection: mentor vs. protégé.

Of Coach Porter, Lakeland head coach Tarijuana Napoleon said, “Everything I know I actually learned from her.”

Napoleon knew to expect a fight from King’s Fork from previous experience but also because she knew Porter “doesn’t want to take a loss from the one she taught everything to.”

Nevertheless, the season was a significant success for Lakeland, which one year ago went 0-20. This time they finished 9-13.

“I did want to go .500 with this new conference, and we did accomplish that,” Napoleon said of the team’s 5-5 conference record.

She hopes the squad’s success will help build interest at Lakeland and draw some more players to the sport.

Regarding Wednesday’s match, Napoleon said, “I think we could have done better, but I’m happy with where we left off.”

Senior Kristen Walden had another impressive service game, with seven aces to go with 11 kills. Senior Logan Reid had 13 kills, and senior Khadijah Clouden, a first-year player brought in specifically for her blocking skills, had eight blocks.