Like a chorus in a song, junior slotback/defensive back TyQuan Weston’s name has started coming up regularly in King’s Fork High School box scores this season.

“Ty’s one of those guys that, last year, really committed to be in the weight room, working out in the offseason,” Bulldogs head coach Joe Jones said. “He made himself a lot faster and stronger.” 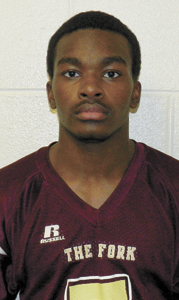 That impressive combination of strength and speed helped him score three touchdowns in the Nov. 1 home win over Hickory High School. His performance led to his becoming the very first King’s Fork football player to win the Duke Automotive-Suffolk News-Herald Player of the Week.

The 35-14 win gave the Bulldogs an unprecedented undefeated regular season at home. It was a particularly rainy night, and Jones said, “We only threw one pass because of the conditions, and he made it count.”

He hauled in a 50-yard touchdown pass from senior quarterback Uriah Adams. Then, Weston scored on a 3-yard run to put his team up 28-0 at halftime. After the Hawks got on the board in the second half, he turned the tables on them once more with a 79-yard kickoff return.

Weston dedicated his effort to his teammates being honored on senior night.

“I knew I had to go out there and play hard for those guys,” he said.

He has made a habit of pulling inspiration from people to create his impressive on-field performances.

He said he has observed the difficulty Coach Jones and the staff have gone through at King’s Fork in the lean years, but now the success has started to come. Weston said his drive to go out and give it his all comes because he wants to “win it for Coach Jones.”

His motivation also traces back to his grandmother, Karrie Keisor, who passed away three years ago, but had always desired to eventually see him play in high school.

It was his father, Maurice Weston, who helped give Keisor that desire by putting a football in TyQuan’s hands when he was a young boy.

A big college football fan and former player for Churchland High School, Maurice Weston said he noticed his son’s size and speed and started teaching him some of the basics.

TyQuan Weston remembers getting his start as a quarterback with a Pop Warner team in Hampton. He later transitioned to running back, the position where his dad trained him.

He started at cornerback on varsity as a sophomore. Maurice Weston said he thought his son was nervous his first year on the team.

“But this year he got a lot more focused and did what he had to do.”

He has started getting more time on both sides of the ball now that former Bulldogs star Charles Clark has moved on to college.

“He just took up where Charles left off,” Maurice Weston said. He said TyQuan does not have the size to be the kind of wideout former Bulldogs star Davon Grayson is, but he does have speed.

Jones said there are not a lot of players who can run a legitimate 4.4-second 40-yard dash, but Weston has hit that mark more than once.

TyQuan Weston said, “I’ve got gears, like three of them, so I just turn them on.”

Even Weston’s father was surprised.

“I never thought he was faster than me, but yeah, he’s pretty fast,” he said.

TyQuan Weston has an idea of where he would like to take that speed. “I’m really interested in (Old Dominion University), seriously,” he said.

His father kind of likes that idea, too. “I’d get to see a lot of his games,” he said.

With hard work and good health, Weston has already begun to make himself a notable prospect for recruiters next year.