A typhoon during World War II

Vet recalls ’44 storm in the Philippines

The typhoon that killed an estimated 10,000 in the Philippines on Friday was the latest of many strong storms to have hit the islands over the years, Suffolk’s Ray Nelms can attest.

Now 89, the World War II and Korean War veteran was an Army corporal when the 150-by-200 foot supply tent he was in charge of guarding from hungry servicemen was blown somewhere into the jungle. 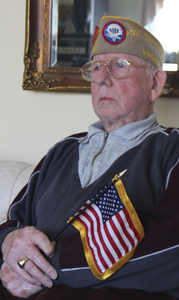 “It was about the same time of year, in 1944,” Nelms said on Veterans Day, seated at home among war memorabilia and artifacts: honorable discharge papers, Japanese war currency and cigar boxes full of fading photographs of the kinds of buddies Nelms says are harder to come by now.

“It was the same type of storm. It was terrible, I guess. Probably 200-mile-an-hour winds.”

Nelms said he was asleep when the typhoon hit. One minute, he was peacefully recuperating after another day in the jungle. The next, he was being lashed by the wind and rain.

Nelms said rain was a constant in both the Philippines and New Guinea, the latter his first overseas posting with the 874th Airborne Engineers.

“I’ve still got jungle rot on my foot,” he said. “If I stay in a cool climate, it’s all right. It comes from dampness and heat.”

It had rained for six straight weeks before the typhoon blew in. “It rained all day long, all night long,” Nelms said. “The mud got up to your hips; you couldn’t do much about it.”

As a teenager, Nelms had earned money hauling coal and firewood for neighbors. He said he dropped out of high school after Pearl Harbor, knowing he’d be drafted. The first draft notice arrived in February 1943.

In the Army, Nelms went to radio school, then machine gun school and glider training, earning the rank of corporal in two months. Soon, he sailed for New Guinea from San Francisco.

General Douglas MacArthur sent Nelms’ unit to Saidor to build an airfield, which Nelms said they achieved in three days.

Once the island was secure, the unit was sent on to the Philippines. Nelms said they were on the island of Luzon on D-Day.

After an honorable discharge with three Bronze Stars in 1946, it wasn’t long before Nelms and brother Fred, who served with the Air Force during World War II and also still lives in Suffolk, joined the Naval Reserves; the perceived threat of communism in Korea saw to that.

Between the wars, Ray Nelms married Agnes Barlow, bedridden now with Alzheimer’s disease, and the couple’s only daughter, Debbie, had been born. “I joined the reserves to make money” for the family, Nelms said.

He sailed on the USS Tarawa as a gunner’s mate, finally serving his country for a total of eight years.

When Nelms’ life in the military came to an end, he made use of the night classes he’d taken in retail and started working for Russell & Holmes Shoe Store in downtown Suffolk, retiring as a manager 43 years later.

Nelms doesn’t know how many were killed by the typhoon he experienced in 1944. He said they were in the middle of a jungle fighting for the survival of western civilization. Confusion reigned much of the time, and this wasn’t helped by a freak storm. “It was a different world,” he said.

He recalled a Filipino girl who was his secretary during the mission to guard the supply tent from hungry comrades. The daughter of a member of the nation’s ruling hierarchy, she was better educated than he was, attractive, and wanted to get to America.

These days, Nelms looks after his wife, has been the commander of Veterans of Foreign Wars Post 2582, and serves as a life deacon at First Baptist Church.

America was lucky to emerge from World War II in the shape that it did, he said, adding, “We were blessed; we survived with far less damage than any other nation.”

He doesn’t know what became of the supply tent. “We never found it.”