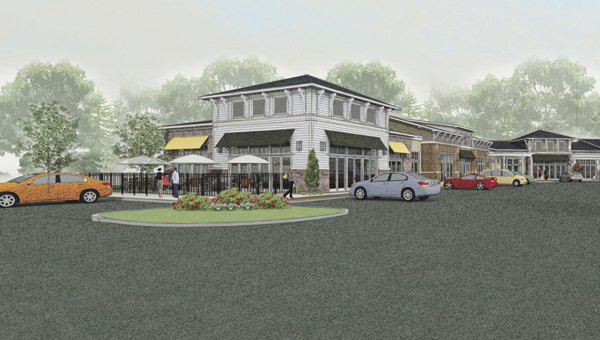 An artist’s impression of a future high-end retail/office/medical development near the corner of Harbour View Boulevard and River Club Drive.

North Suffolk’s commercial development is moving ahead, with one project announced and another progressing after the purchase of land for a hybrid grocery store.

Virginia Beach-based Gee’s Group recently closed on the 3.9-acre site, Wynkoop said, and the project will span 39,000-plus square feet across two buildings.

“There will probably be some attorneys or insurance agents, because of the office mix and the setting, and the high-end feel,” Wynkoop said, explaining he has only recently begun a marketing campaign ahead of design and site plan approval by the city.

Family-friendly, quality restaurants like YNot Pizza and Italian Cuisine would be a good fit, he said, as would high-end retail outlets and medical groups.

“We have already got lots of interest from a lot of groups I have contacted,” he added.

Meanwhile, Kroger announced in a news release this week it has finalized purchase of 11.6 acres for what would be Hampton Roads’ third Marketplace hybrid grocery store.

Kroger’s $21.7 million investment with the Suffolk Marketplace will bring up to 350 new jobs, from a variety of associate to management positions, the release states.

The store’s opening is planned for fall 2014, and it will also incorporate a gas station where shoppers can redeem their Kroger fuel points for discounts, the company says.

Atlanta-based R.W. Smith Company has been selected as general contractor for the new store.

“We’re looking forward to being part of the community and providing a top-notch grocery experience for those who live in and around the Hampton Roads Crossing area,” Jay Cummins, Kroger’s Mid-Atlantic Division president, stated in the release.

“The Hampton Roads Crossing shopping district in North Suffolk is an excellent location for our continued expansion.”

River Front Shoppes is scheduled for completion in the summer of 2014, Wynkoop said.