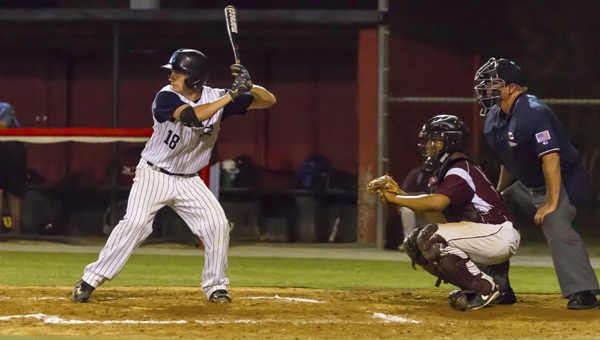 Lakeland High School senior Tyler Lilley, at bat, played well enough to be selected to the all-region first team as a catcher, despite the Cavaliers not having played at the regional level this year. He had a .383 batting average this season.

NR coach Mark Stuffel said they all had great seasons, they worked hard, and “it’s nice to see them get rewarded for that hard work that they put in.”

He noted this work ethic was also present in the classroom. All three players were All-Academic honorees because each held a grade point average above 3.0.

“Especially in baseball where there’s not a whole lot of scholarship money out there, the grades are very, very important,” Stuffel said.

The trio of Warriors had never made the first team at the regional level, and for himself, Fitzwater said, “I felt really honored.”

Stuffel said the top coaches in the region chose Fitzwater because he was 5-1 on the mound for 2014, threw a no-hitter against Lakeland and threw seven innings against eventual state champion Hanover High School in the regional semifinals, only allowing three hits.

Kieton Rivers said making the first team means a lot and deflected the credit when he said, “it’s an honor because of the hard work the coaches have put toward our team.”

Stuffel said Rivers was chosen because he is a solid all-around player. It showed when he was on defense, but particularly when he was on offense, where he led the team in almost every statistical category.

Trevor Riggs was pleased by his first-team accomplishment.

He had 16 extra base hits on the year, which Stuffel cited in accounting for his regional honor.

“He sticks out with his power at the plate,” Stuffel said.

Lakeland senior Tyler Lilley made the first team as a catcher, standing out despite his team not advancing to regionals.

“It’s very special to me,” Lilley said of his first-ever regional honor. “It surprised me actually when Coach (David) Devers called me and told me that I got it.”

Devers said Lilley batted .383 for the season and applied himself completely, no matter the situation. He said Lilley was the type of youth who would do whatever was asked of him, “so I’m sure that’s what stood out for some of the coaches.”