As the world’s tennis greats have rallied at Wimbledon for the past two weeks, Suffolk native Shannon Greene has been keeping the spectators well fed.

Greene, a 21-year-old Lakeland graduate who lives in London where she majors in computer science at Kingston University, landed the job with Facilities Management Catering for the length of the tournament through her regular job with the Rugby Football Union at Twickenham Stadium. The company providing the catering for the tournament also does the food service at Twickenham, she said. 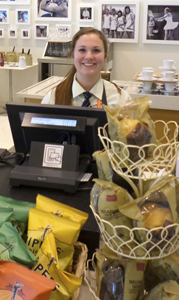 Suffolk native Shannon Greene is ready to serve tennis spectators at the Terrace restaurant on the Wimbledon grounds last week. Although her restaurant was open only to top-tier ticketholders, she did not spot any athletes or celebrities, she said. (Courtesy of Shannon Greene)

Greene worked in the Terrace restaurant, which is located near Centre Court, the venue for most of the tournament’s major matches, she said. Her restaurant was one of a few that only holders of debenture tickets — one of the most expensive pricing options for the tournament — could access.

“My official position is cashier,” Greene wrote in an email. “I do a range of things from transactions to restocking and also dealing with customers on a one-to-one basis. All of the staff are expected to go above and beyond the call of duty when it comes to the little things, like carrying a customer’s tray or fetching them something for which they’ve asked.”

The Terrace restaurant is a self-service, buffet-type restaurant, Greene said.

It did take a while for Greene and the rest of the staff to get on their feet, she said.

“During one of the first days of the championships, when most of the staff still hadn’t really gotten their footing yet, I managed to drop about six tea cups at one time,” Greene said. “Fortunately, I only broke one. A manager told me that was the only one I was allowed to break during the entirety of the two weeks. It took me a few minutes to realize that he was kidding.”

Because her American Southern accent has been a good conversation starter, Greene has gotten to know several customers, although none of the athletes or big-name celebrities has been among them.

“Unfortunately, I haven’t had any encounters with any athletes or stars,” she said. “There have been quite a few big names at the championships this year, including Prince William and Princess Kate and Hugh Grant, but I didn’t have the opportunity to see or speak to them.”

But there is one customer she got to know quite well — except for one little detail.

“There’s a customer I’m quite fond of who comes in every day,” Greene said. “She has been coming to the championships for about 50 years now. She is very particular and gets the same thing every time she comes in, so I know exactly what she wants and usually do it without her asking. Every day that she comes, she brings a different guest with her and introduces me to them. Thus far I’ve met her husband, son, daughter-in-law, two different friends and her granddaughter. The only thing is she’s never introduced herself to me, and I have no idea what her name is.”

Greene said she was able to slip into the seating area after her shift and catch a few sets.

“There is a large lawn on the grounds with a giant television, so I’ve been there a couple of times with some coworkers to watch a match or two as well,” she said.