North Suffolk’s Kelli Horton began her long journey with Doughtie’s Classic Barbecue when she was growing up in Chesapeake.

Her family ate it at home, and it was served in the cafeteria at her school. 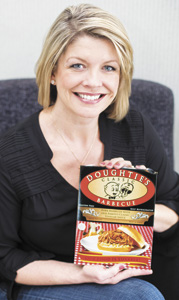 North Suffolk’s Kelli Horton took over the Doughtie’s Classic Barbecue brand — which her husband’s grandfather started more than 50 years ago — in 2011, and has seen it reintroduced into grocery stores and generally given a new lease on life.

But little did she know a Portsmouth family was behind the brand. At least, not until 21 years ago, when she met her future husband, Robbie Horton, grandson of the founder of Doughtie’s.

Founder Robert Doughtie dropped out of the eighth grade to support the family after his father died. But he didn’t start the barbecue brand, which came from his own secret recipe, until he was 40, in 1952.

When Robert Doughtie died in 1981, his business had grown into a multi-faceted, publicly traded food distribution company. The company merged with Sysco in 1999, Kelli Horton recounted.

But the barbecue manufacturing business had already been sold by that time, purchased by Smithfield Foods in 1997. That company sold Doughtie’s barbecue until deciding to drop the brand in 2011.

That’s when Horton’s complete immersion in Doughtie’s barbecue began. Her husband’s uncle brokered a deal with Smithfield to sell the brand back to the family for $1. Kellie said she took it on, because her husband didn’t have the time.

So a 40-year-old who’d taught seventh grade for a year before deciding to quit teaching to raise two young girls — though she continued volunteering at school — was suddenly responsible for perpetuating the gastronomic legacy of her husband’s family.

While distribution to restaurants had never ceased, Horton said, retail had been phased out in the early 2000s.

Learning as she went, she started selling Doughtie’s online. “I blasted it through social media, and all of a sudden I was able to sell it all over the country,” she said.

She discovered that local customers would sooner buy their Doughtie’s from a grocery store than online, and so designed packaging, found a distributor and, at the beginning of 2014, snagged Farm Fresh to sell it in Hampton Roads, the Northern Neck, Williamsburg and Richmond.

Kroger soon jumped aboard, selling the brand in Hampton Roads before promptly expanding to Richmond; and now it’s reportedly planning to sell Doughtie’s throughout the Mid-Atlantic.

Horton said she wants to maintain the Doughtie’s legacy for her girls, Brady, 8, and Ryan, 13.

“It’s important for them to see I made the effort and was able to work it out — and to be resourceful and not quit,” she said.