Regina Brayboy says she didn’t think of a culinary career while growing up on the Northern Neck, but it was a place where food — good food — factored heavily in daily life.

“It was such an intrinsic part of my upbringing,” said the new Suffolk News-Herald columnist who’s starting on the Food and Beverage page next Wednesday.

Brayboy came from a family of cooks, but not professional cooks who did it to earn a living. They were cooks for the pure joy of food and all that it entails and took advantage of the fresh produce surrounding them. 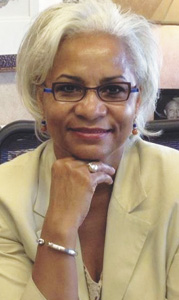 North Suffolk resident Regina Brayboy, a food industry entrepreneur after a long and successful corporate career, is a new columnist on the News-Herald food page. Her first column will appear next Wednesday.

“Fresh produce and fresh-caught fished turned up on people’s tables all the time,” Brayboy said of the Northern Neck of her childhood.

The latter venture uses blogs, columns and various other platforms of communication to explore the place where food, culture, family and history meet. It’s about “connecting all those pieces together,” Brayboy said.

She said she embarked upon the pie company with a friend after starting cooking for pleasure and focusing on making pies.

“It was just something to do to relax,” she said.

“People would ask me to make a pie for them. I was thinking about launching a business, and a culinary business seemed natural.”

Embarking on a small business, Brayboy said she “started out wearing all the hats,” including navigating the various regulations of the food industry, devising a logo, figuring out what equipment to purchase, and deciding whether to do retail or wholesale.

Brayboy said she and her friend spent four to six months “getting all those pieces squared away.”

Ultimately, they decided to share equipment and costs but runs separate businesses.

Brayboy, who has worked for Virginia International Terminals and WHRO, serves on a number of boards and holds a Master of Business Administration from the College of William and Mary, moved to The Riverfront in Harbour View in 2005.

Just recently, Brayboy was struck by the difference between somewhere like Bennett’s Creek Farm Market, which supports more local producers, and a chain grocery store. “That’s something I’ll definitely want to explore in the column,” she said.

“It has a whole different energy when you walk into a local country market like that — it really reflects the community.

“Suffolk still has a little bit of that flavor to it, so I’m looking forward to exploring Suffolk from that perspective.”