If visitors to the West End and Lakeside neighborhoods filled out surveys after their trips, James Strickland hopes the area’s hospitality would receive poor reviews from criminals.

“Crooks don’t like visibility,” said Strickland, the president of the West End-Lakeside Civic League. “I want them to say, ‘I couldn’t walk 10 feet into the West End neighborhood before somebody was ratting on me.’” 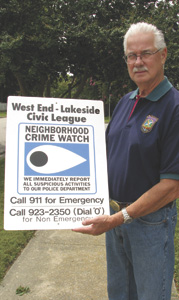 James Strickland, president of the West End-Lakeside Civic League, shows off one of the neighborhoods’ new Neighborhood Watch signs that aim to deter criminals from the area.

“We started as a civic league last year to look at what we could do differently between National Night Out last year and National Night Out this year,” Strickland said. “We kind of concluded that based on some instances of theft and crime and vandalism, we needed to do something more than just complain about what was going on.”

Strickland said the program has received good interest from most of the neighborhoods’ 450 or so households. Fundraisers generated about $1,000 needed to pay for signs warning criminals they weren’t welcome, and residents are being encouraged to keep their eyes open and report what they see to police and to their neighbors.

The neighborhood has started a phone tree, a Nextdoor.com page and a Facebook page to keep residents connected. They’re encouraged to report everything, no matter how seemingly insignificant — whether it’s a stolen license plate or a group of people looking into vehicles, for instance.

“If they see something suspicious that bothers them, whether it be daytime or nighttime, pick up the phone and call the (police) non-emergency number,” Strickland said residents have been encouraged. “Nothing is too light or too simple. I think we’ve been conditioned not to bother the police because they’re too busy.”

Strickland said everyone is encouraged to get involved, whether it’s through working the phone tree or simply keeping the porch light on and watching the surroundings.

“It’s interesting, when you stop for a minute and look out the window, what you do see,” Strickland said. “It’s really about getting the community involved and getting them to be a shareholder in the process.”

Strickland said the signs will be going up soon, and more may be ordered based on the effect of the first batch. Other efforts, such as working with railroad company CSX to plug holes in the fence along the railroad tracks bordering part of the neighborhood, have been successful, Strickland reported.

“It’s a work in progress,” he said. “We’re hoping that by getting out information, we put up a front.”

For more information on the community’s efforts, call Strickland at 539-9136.