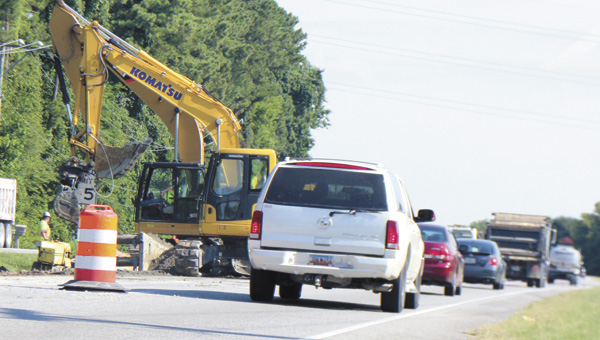 Workers install a new water main in the center median on Bridge Road, as traffic passes in the outside lanes due to inside lanes being closed. The city has announced extended work hours to shorten the duration of the traffic-control plan.

Suffolk officials have extended work hours in an effort to speed up the installation of a water main along Bridge Road and thereby reduce the impact on motorists.

From the intersection of Lee Farm Lane to the Mills Godwin Bridge, inside lanes were closed to traffic around the clock between Monday, when work started, and Friday.

Work had been scheduled for 7 a.m. to 4 p.m. weekdays, apart from public holidays, but the city announced Friday an extension to 6:30 p.m., effective Monday.

This will allow for installation of most of the main “by the end of August, if not sooner,” and no later than Oct. 1.

When first announced, the city said the traffic control plan would continue through Oct. 1, without suggesting an earlier completion.

“We all realize that they’re doing a great job out there and we’ve got to do progress and all, but there seems to be a heck of a stack-up in the traffic,” Fawcett said.

“We had people backed up on the highway yesterday. It’s senseless to have traffic jammed up down there and they’re not even working in the median.”

Debbie Lanthorn at Master Cleaners, on the affected section of Bridge Road, said the traffic has been “rough,” but the dry-cleaning business wasn’t particularly impacted, since most customers travel from downtown Suffolk on Bennett’s Pasture Road.

“For some customers who live over the bridge, and the other lady that works here, it bothers her, because it takes her a while to get home and to get here,” the clerk said.

“It’s not much of a problem until 4 p.m.,” he said. “The traffic heading west starts to back up.

“But they have kept the turn lane out there; access is not impacted too much.”

With the new work schedule, the city hopes to remove the majority of the traffic control before the new school year.

City staff will monitor the situation and make “appropriate adjustments” to traffic-control devices “to assist the traveling public while ensuring a safe work zone,” according to a news release.

In its latest announcement, the city also says all traffic-control devices will be removed Friday afternoons, returning traffic to both lanes in each direction for the weekend.

Pipe installation at intersections is scheduled during the evenings.