A hotel that has been in the works for 12 years has finally broken ground off Godwin Boulevard next to Route 58. 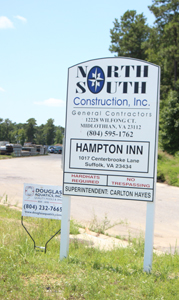 New Hotel: Construction has begun on Suffolk’s first Hampton Inn, at the corner of Godwin Boulevard and Route 58. The project has been stalled for years.

In May, a news release from the city foreshadowed the construction kick-off, describing Suffolk’s first Hampton Inn as a 56,000-square foot, 94-room development.

“We are excited to grow our strong relationship with Hilton Hotels. This new Hampton Inn expands our footprint into the Suffolk market and allows us to provide a fresh, new product to a broad base of customers.”

But the project has a long and difficult history. In September 2002, the Suffolk News-Herald reported Virginia Beach-based Tetra Company’s purchase of about 50 acres across from Obici Hospital, encompassing the current development site.

It was reported that a North Carolina-based hospitality company, negotiating for a hotel franchise, had a contract on part of the Centerbrooke Lane development. It was unconfirmed, but Hampton Inn was rumored to have been a “leading contender.”

According to reports by other news outlets, Tetra raised tens of millions of dollars from investors via several investment funds — and in bank debt — for various East Coast mixed-use developments. A handful of projects came to fruition, but many more failed, leaving investors out of pocket.

A February 2012 story by the online publication Richmond BizSense noted a string of foreclosures and lawsuits filed against Tetra by its lenders on projects around the commonwealth. The publication also stated that it had “learned that state and federal authorities were looking into the company,” adding that the State Corporation Commission had opened an inquiry and was looking for information from investors about the company and its funds.

Ken Schrad, a spokesman for the State Corporation Commission, was barred by the Virginia Securities Act from confirming or denying that report because a formal commission case has not been made public, he stated.

But two limited liability Tetra entities, Tetra Companies and Tetra Company, were automatically canceled in 2010 for not paying the $50 renewal fee, according to Schrad.

Numerous land records in Suffolk Circuit Court show seven separate Tetra entities were involved in the Centerbooke Lane project, transferring property from one to another, securing bank loans against the assets, and other dealings.

In 2011, Richmond BizSense reported that it appeared the company principals would resell land from one Tetra fund to another, for a higher price each time, and pocket the proceeds.

Today, Tetra is again out of the picture in Suffolk, with the Centerbrooke property having been reclaimed by the lender.

Troy Parker is marketing Centerbrooke Village, a 44,000-quare foot retail development to be built in front of the Hampton Inn.

According to Parker, the Centerbrooke project is finally back on track after the new developers purchased the land a bank had claimed back from Tetra.

With 40 properties it owns and manages in several states, Shamin Hotels is billed as the largest hotel management company in Central Virginia, according to Suffolk officials.

“This new hotel showcases the diverse economic development growth occurring in Suffolk,” Suffolk Mayor Linda T. Johnson stated at the beginning of May.

It also will mark the end of a very long road to developing the property.