Rountree said he was opening the mail on Thursday and noticed something had come from the National High School Coaches Association. He was shocked and excited when he read what it was, not knowing who had nominated Coach Worley. 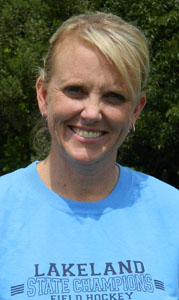 “I called her, I emailed her and texted her all at the same time to make sure I got her,” Rountree said.

Worley has received many accolades during her 15 years of excellence as the coach of the Lady Cavaliers, but this is the highest profile recognition she has received to date.

“It was pretty surprising,” Worley said. “It was kind of like the last hurrah. It’s always nice to be recognized, but that’s not why you do it.”

The NHSCA is a 501c3 non-profit service organization that was founded to provide the nation’s one million high school coaches with leadership and support. It selects national coaches and senior athletes of the year in 20 boys’ and girls’ sports.

Worley was listed as the 2014 NHSCA National Field Hockey Coach of the Year, with an accompanying description that summed up her entire varsity coaching career at Lakeland. It noted she built the school’s field hockey program “into one of the best in the state of Virginia.”

She said the best part of the NHSCA’s honor was the recognition it gave to Lakeland.

“That’s kind of what I wanted from day one,” she said. “So, to know that that was said by someone else is kind of cool.”

Lakeland’s new head coach, Cortney Parker, had a part in Worley’s success and also a front row seat after playing for her and spending six years as her assistant coach.

“I think it’s great,” Parker said of Worley’s national award. “I can’t think of a coach who deserves it more than her after what she’s done with the program.”

Recent Lakeland graduate Summer Parker was a key player on the field during Worley’s run, and one of several players from last year’s squad to be playing Division I field hockey in college this year.

“I think she definitely deserved it,” Summer Parker said of Worley’s honor. “She’s worked really hard those past years,” and helped her and her teammates get to where they are today.

One of Parker’s fellow teammates and graduates, Jessie Cox, felt the award was appropriate.

“I think it takes a lot to become the National Coach of the Year,” she said. “I think that she really does deserve it and everything that she has gotten is because of her hard work.”