The Lakeland High School golf team came close to qualifying for regional competition last year, while three Cavaliers made it to regionals as individuals, and these developments are helping stoke the motivation of Lakeland golfers during the 2014 season. 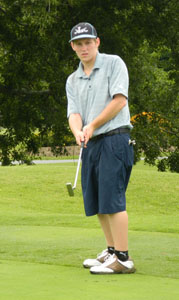 Lakeland High School senior Blake Harris is the top golfer for the Cavaliers this year, striving to make a return to the regional tournament, which he qualified for individually in 2013.

“This year we actually only have six players,” Lakeland coach Stephen Watkins said.

But four of them are seniors, including Harris and Boswell, giving reason for some confidence.

Watkins described his expectations for his team this year, understanding it is up against a strong program at Nansemond River High School.

“Nansemond River has a really good squad again this year, and they’re in our (conference), but other than that I think it’s really wide open, and I think we can compete for that second team spot,” he said. “We’re playing a little out-gunned, but that’s OK. We enjoy it.”

Helping give them a realistic chance of making second happen this year is Harris, Lakeland’s new No. 1 player.

“Blake Harris is definitely my best golfer,” Watkins said. “He’s dedicated himself a little more this year after qualifying for regionals last year. That’s something none of these kids had ever done.”

The coach said pretty much all Harris and Boswell talk about now is their desire to get back to regionals.

“It made them hungry,” he said.

Harris and Boswell had a rough start to the 2014 season on Monday but were Lakeland’s top golfers in a 347-456 loss to Hickory High School at Nansemond River Golf Club. Harris shot a 108 and Boswell shot a 109.

Joining Harris and Boswell on the roster are fellow seniors Jacob Diggs and Blake Bullock.

“Jacob Diggs has played No. 2 the first couple matches we’ve had,” Watkins said.

While some might have expected Boswell to have a lock on the No. 2 spot, Watkins said Boswell and Diggs will “go back and forth. They’re competing for it. Jacob Diggs has just a little more experience. He’s been playing golf longer.”

Bullock is in the No. 4 position, possessing about two to three years of experience.

Lakeland’s other golfers, sophomores James Whitley and Kently Peed, are very new to the sport.

Whitley, also a tennis player, has already shown great improvement, shooting a 125 on Monday, but then a 108 in Tuesday’s 335-481 loss to Western Branch High School at Cahoon Plantation Golf Club.

Harris shot a team-best 90 against the Bruins.

Lakeland (0-2) returns to the links on Monday against Deep Creek High School at Bide-A-Wee Golf Course.