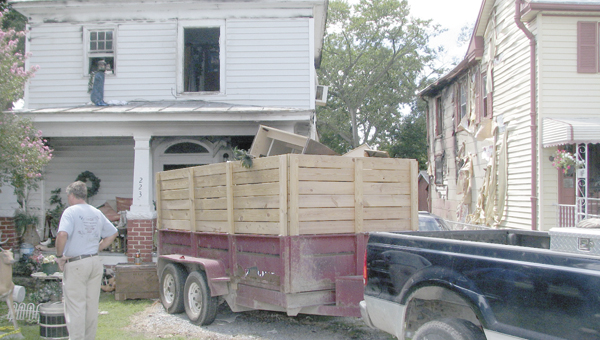 On Monday, men work at the scene of a fatal fire on North Division Street. Joseph Booth, 47, died in a Sunday morning fire in the home on the left. Two people were displaced from the home on the right because it sustained major damage due to the heat.

A 47-year-old Suffolk native died in a fire in the 200 block of North Division Street early Sunday morning.

Joseph Booth, 47, was found by firefighters in an upstairs bedroom at the home, according to a city news release.

Booth was a “good son” who leaves behind a 16-year-old daughter, three brothers and a sister, said his mother, Margrit Anne Booth.

“It’s a great loss to the whole world,” she said. “Everyone knew him.”

Booth worked as a longshoreman and had just worked on Saturday, after which he cut his father’s grass for him before settling in at home.

The two-alarm fire was reported at 3:35 a.m. Firefighters found heavy fire at the rear of the house upon arriving four minutes later and heard several small explosions from a gas grill’s propane tank as well as a motorbike.

While a ladder crew attacked the blaze at the rear of the house, firefighters entered and searched through the heavy fire for the resident. Booth lived alone, according to the release.

A second home nearby sustained major damage because of the intensity of the flames. The two adults who lived there were displaced and are being assisted by family members.

Suffolk police detectives and the Fire Marshal’s Office investigated the cause and ruled it accidental, according to the release.