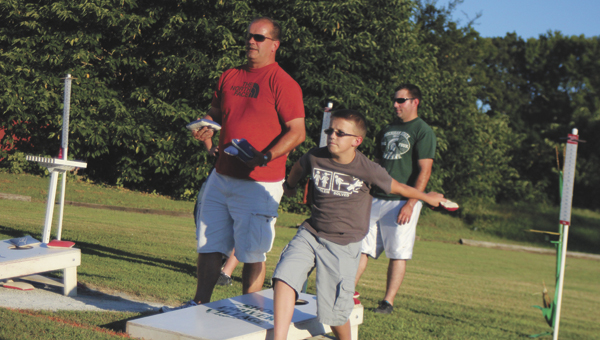 Darren and Hardman and 15-year-old son James perfect their toss during Driver Cornhole’s Wednesday tournament, which costs $2 per player and raises money for a variety of charities. This year, players are outfitting aircraft carriers with professional cornhole kits.

One day almost 3-½ years ago, Driver’s Ken Parsons and a friend were “tossing some bags” when conversation turned to the deadly tornado that had just hit Gloucester.

The tornado that pummeled their community in 2008 still fresh in their minds, they decided they could do something to help.

“I said, ‘I wish I could help those that were affected just as I had been helped by citizens from all over that I did not even know,’ and I said, ‘Let’s Toss For Gloucester,’” Parsons related in an email.

The Wednesday night cornhole tournament in the parking lot next to Parsons’ family’s Knot Hole Station has grown into something to behold.

Rain, hail, shine, ice — almost any weather — about 30 players gather to enjoy a beverage or two, talk about the week that’s been and throw bags at boards.

“It’s more about the friendships that are formed,” Jim Allen, one of the core players, said during Wednesday’s tournament.

“It’s a social event, and we are helping charities also.”

Players shell out two bucks to play. It’s not a huge amount, but Driver Cornhole — which has grown to become Hampton Roads’ third-biggest cornhole group, and the only one with a charitable mission — has supported various causes after helping out Gloucester’s Page Middle School with $1,700 to replace band equipment.

Each October the group does Toss For Tatas, with over $2,200 donated to the Susan G. Komen fund and Chesapeake Fire Department’s Pink Fire Truck. Toss For Kids has raised $1,500 for the Children’s Hospital of the King’s Daughters.

This year, Wednesday night in Driver is dedicated to Tossing For Troops. The first $600 bought two sets of professional boards and bags for the USS Harry S. Truman. Players are finishing up signing the boards with personal messages, and they’ll be presented to the commander on the Norfolk-ported aircraft carrier’s flight deck at the beginning of September, Parsons says.

“We are giving something physical to the aircraft carrier,” Parsons said, explaining that playing cornhole on the deck will give sailors something to do and keep their spirits up.

Next up is the USS Theodore Roosevelt, which also will receive professional cornhole sets courtesy of Driver Cornhole.

According to Allen, members of the Driver group might be big on charity, but many also savor the competition.

“It’s very competitive,” Allen said. “But it’s not to the point where people are getting angry. It’s just fun.”

The group welcomes families and players of all skill levels. Parsons said it’s a great environment in which to learn the game. 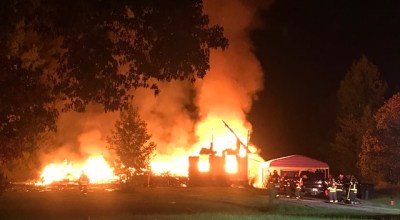 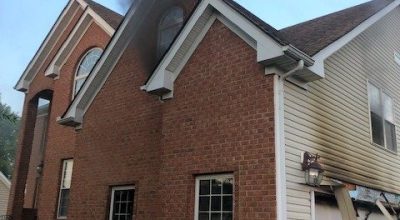