King’s Fork High School’s football team left no doubt on Thursday night that it was picking things up where it left off last year, which was the most successful season in the history of the program.

The Bulldogs cruised to a 55-0 victory over visiting Deep Creek High School on Thursday to begin their 2014 campaign.

KF coach Joe Jones called it a “great way to start the season.” 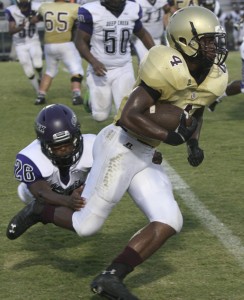 “Defensively, I thought we played great,” he said. Speaking of his defensive coordinator and former Deep Creek head coach David Waddell, Jones said, “He’s one of the most prepared coaches I’ve ever been around.”

Aside from allowing hardly any major gains from the Hornets offense, the Bulldog defense’s exploits included a fumble recovery, an interception and return by junior defensive end Justin Holloway that set up an easy score and a 49-yard interception return for a touchdown by senior linebacker Keyon Ross.

Jones said the offense had him concerned after a three-and-out to start with, but then an adjustment to the blocking scheme helped turn things around.

“Once we got it going, we just kept our foot on the pedal,” Wethington said.

Wethington ended up with three touchdowns and a two-point conversion.

Bulldogs junior quarterback Ryan Kluck had a productive day through the air, with two touchdown passes. One was a 49-yarder to senior slotback Duke Santora and the other was a 10-yarder to senior wide receiver Camryn Little.

Senior slotback Ty’Quan Weston also got in on the scoring with a 58-yard rushing touchdown, and Santora followed that up with a 10-yard scoring run.