It had not happened since 2002, and it took a full 60 minutes of regulation, plus three minutes and 30 seconds of overtime on Thursday, but Nansemond River High School’s field hockey team finally defeated Lakeland High School, 2-1.

“To finally accomplish that after so many years, it just felt empowering,” said Lady Warriors junior Ashley Hiltabrand, who scored the winning goal. 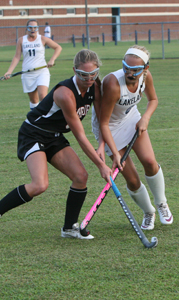 Describing how it happened, she said juniors Claire Janek and Jaclyn Mounie were passing along the sideline and Mounie got into the circle while she went to man the back post of the goal.

Mounie took a shot, and “I just collected it and put it in the back post,” Hiltabrand said.

“It was an exciting win for us,” NR coach Ali Mowry said.

She focused on what the game meant in terms of her team’s efforts to win the Ironclad Conference this year. The Lady Warriors also defeated conference rival King’s Fork High School on Monday.

“These were the two most important ones to have under our belt,” Mowry said.

Both the Lady Warriors and the Lady Cavaliers had their chances to score on Thursday, as they had nine and seven offensive penalty corners, respectively. Ultimately, the contest came down to the seven-on-seven overtime session.

Parker also indicated her team was focused on the here and now, rather than the historical significance of Nansemond River’s win.

“We’re not worried about what was done in the past,” she said.

Lady Cavs sophomore Kaylene Thomas scored the first goal of the game with just under six minutes to go in the first half.

The Lady Warriors were quick to respond, with senior Desiree Patterson evening the score with just over two minutes remaining in the half. She was assisted by sophomore Ariana Samuel.

NR senior Juliana Stewart and sophomore Karah Foster drew praise from Mowry for bringing energy off the bench, while Parker highlighted the play of Lakeland junior Shannon Leonard in the midfield and junior Stasha Waterfield in the back.

Mowry noted her team played well in spurts and was inconsistent at other times, but she also said conditioning played a role in the contest, helping her team gain the upper hand.

The game marked the end of challenging weeks for both teams.

“I felt like out of the games we played this week, (Thursday’s) was one of our best,” Parker said. “We just couldn’t finish.”

Meanwhile, the Lady Warriors endured a 75-minute game against King’s Fork on Monday that they won in strokes and suffered a 9-1 loss on Wednesday against visiting Hickory.

“You can definitely tell they’re an experienced team,” Mowry said of the Lady Hawks.