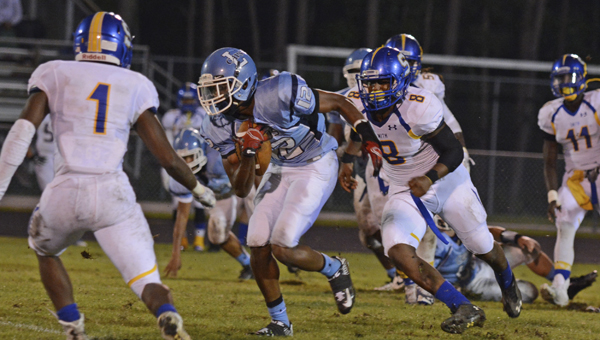 Lakeland High School senior Convon’Tra Revell was one of the bright spots for the Cavaliers on Friday during their 48-7 loss to visiting Group 6A heavyweight Oscar Smith High School. (Melissa Glover photo)

Lakeland High School’s football team set an impressive tone at the beginning of its contest against visiting Oscar Smith High School on Friday night. But it could not ultimately make it last against the Group 6A behemoth, falling 48-7.

The Cavaliers forced a fumble in the first quarter and recovered the ball on the Tigers’ five-yard line. Two plays later, Lakeland sophomore Alajuwun Langston ran it in from about three yards out to give the Cavs a 7-0 lead with a little over seven minutes to go in the first quarter.

The home team sustained that lead going into the second quarter.

“We came off to a very, very, very good start,” Lakeland coach Bryan Potts said. “We knew we had to come out and match their intensity and just be aggressive.”

He said the Cavaliers had good success early on containing Tigers senior running back Deshawn McClease, a Virginia Tech commit.

But Oscar Smith was able to get on the board early in the second quarter off a blown coverage, and it later took the lead off another blown assignment.

“We’ve just got to do a better job communicating,” Potts said, taking responsibility for the issue.

He pointed to a failure to protect the ball on offense and missed opportunities on defense as the deciding factors in the loss.

The Lakeland offense committed three turnovers as senior quarterback Miles Goodman threw an interception that was returned for a touchdown and Langston and senior running back Jordan Stokley both lost fumbles.

While the Cavs struggled, Potts said the Tigers “just made plays down the stretch.”

His defense was a cause for some disappointment but also praise. The disappointment stemmed from two instances in which Lakeland defenders should have come up with interceptions.

But the praise came because the Cavaliers did pick off Oscar Smith’s quarterbacks four times and also forced and recovered two fumbles.

Barnes had three interceptions for the game, also picking off the Oscar Smith backup twice.

“He did real well for us tonight,” Potts said. “He played big-time football tonight, so I was very happy with his effort.”

Citing the Cavs’ strength at the corner spot, the coach said Barnes and Revell “do a real good job for us, and they can play with anybody.”

Langston continued to shine on special teams. Though he did not score any special teams touchdowns on Friday, Potts estimated all of his returns were at least to the 40-yard line or better, and the Tigers stopped kicking to him after a while.

“He continues to be huge for us in our kicking game,” the coach said.

“Preparation for that starts tomorrow morning,” Potts said late Friday evening. Noting it has playoff implications for his team in the Ironclad Conference, he added, “We have to get this win next week.”