Coach Joe Jones of the King’s Fork Bulldogs had his team prepared to make history on homecoming as they took on perennial powerhouse Oscar Smith, which entered the contest having won 71 in a row against Southeastern District opponents, Friday night. 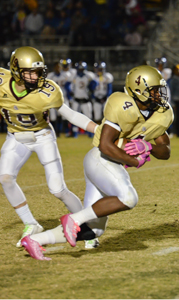 For much of their battle with Oscar Smith, the Bulldogs had some inspiring moments and looked poise to write their own chapter.

While King’s Fork answered three Oscar Smith scores with touchdowns, they ultimately couldn’t match the Tigers in terms of big plays for the entire evening, falling 42-20 to their visitors from Chesapeake.

“In the seven years that I’ve been here, they’ve kicked our tails a couple times, but we never backed down from them. And we never backed down tonight. That’s how I measure our progress as a program. Our kids fight hard and it was just a matter of they out-executed us,” Jones said.

On the game’s opening series, Oscar Smith was intercepted by Bulldogs junior defensive back Quadarius Boyd. The Tigers would get the ball back on a three-and-out and struck first on a touchdown run from tailback Deshawn McClease, a Virginia Tech commit.

The Tigers would push their lead to 21-6 early in the second quarter and appeared to be pulling away, but King’s Fork responded midway through the period. A 22-yard kickoff return by junior running back Deshaun Wethington followed by a pair of 15-yard unsportsmanlike penalties from Oscar Smith provided them with excellent field position. The Bulldogs capitalized on a three-yard touchdown run from Wethington to pull within eight, and would go to half-time down 21-13 when the defense made a stop on fourth-and-goal from the 14-yard line.

An Oscar Smith 55-yard touchdown pass increased the deficit to 28-13 less than two minutes into the third quarter. King’s Fork wasn’t ready to throw in the towel as Wethington took a screen pass from quarterback Ryan Kluck 79 yards for a touchdown. That pulled them within 28-20.

Oscar Smith answered the King’s Fork screen pass for a touchdown with one of their own as quarterback Shon Mitchell found McClease for a 75-yard touchdown that pushed the Tigers lead back up to 35-20 with 8:03 left in the third quarter.

In the game’s final stanza, King’s Fork drove all the way to the Oscar Smith 14-yard line only to have passes fall incomplete on the third and fourth downs, allowing the Tigers to put the game away.

“Early in the fourth quarter, we had a big scoring chance to cut it down from 15 to eight and it was a big missed opportunity there. They then made a big play on third down to get out of it on their next drive and that kind of ended it there,” added Jones.

Celebrating his birthday, Wethington finished up with 216 total yards from scrimmage and two touchdowns, including 137 yards rushing and a touchdown on 24 attempts.

“He’s a great running back and showed it tonight,” Jones commented.

Next up for the Bulldogs is a trip to Hickory (1-7) on Halloween night.

“The kids are upset because we believed we could beat this team and we didn’t. They [Oscar Smith] showed why they are who they are,” stated Jones.

“We’ve got to buckle it up and bounce back next week against a Hickory team that’s big and physical. After that we finish up against Western Branch. These guys have a lot to play for because our best regular season ever was seven wins and we’re sitting at six with two to go.”