Thousands are expected to descend upon Temple Beth-El Wednesday to bid farewell to Chief Rabbi Jehu August Crowdy Jr., head of the largest and oldest congregation of blacks who follow the tenets of Judaism.

Crowdy died April 10 at age 46, a blow for the Suffolk temple that is the international headquarters of the Church of God and Saints of Christ. 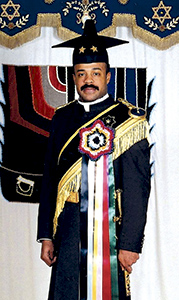 Crowdy was the great-grandson of the 120-year-old denomination’s founder, William S. Crowdy, whom followers regarded as a prophet. In 1903, the former runaway slave purchased 40 acres of land along Route 17 — near today’s Harbour View community — to build Belleville, a church and self-sufficient town for blacks that eventually grew to more than 900 acres.

“It’s a sad, devastating time for us,” said Dr. Phillip McNeil, the former senior rabbi who has been tapped to succeed Crowdy.

The funeral comes just one day before Passover, when a large number of congregants from around the globe — Africa and Jamaica, Alaska and California — often come to their home tabernacle in Suffolk, he said. He is expecting 1,500 to 2,500 people to come for the seven-day Passover commemoration.

“It’s a tragic loss to Temple Beth El and our city,” said Mayor Linda Johnson. “The temple has done so much in conjunction with the city.”

Temple Beth El usually has hundreds of congregants from across Hampton Roads at its Saturday worship services, said Sister Elder B. DaVida Plummer, the temple’s spokeswoman.

The religious organization has roughly 40 tabernacles in the United States, 250 in Africa and one in Jamaica, said McNeil.

Like all six of his predecessors, Crowdy’s funeral service will be held in the smaller, circa-1919 tabernacle on Judah Lane rather than in Temple Beth El’s current house of worship. He will be buried in the Hebron Cemetery, a resting place near Interstate 664 that has historically been reserved for the church’s leadership.

“I know that’s what he would have wanted,” said McNeil. Arrangements have been made for a live video feed of the funeral to be aired in tents on the property for the expected overflow crowd, McNeil said.

Crowdy, at the helm of Temple Beth El for the past 14 years, is remembered by his congregation for wisely guiding and overseeing development of land owned — or once owned — by the temple. He helped bring business and residential growth — including the Comfort Suites Hotel, the Orchards Senior Apartments, Edgewood and BelleHarbour Woods, and Sentara BelleHarbour Medical Center — to the area, said Bob Williams, developer of adjacent Harbour View community.

“They have been the backbone of the community up here for generations,” said Williams, who assisted Temple Beth El with its master development plan. “He (Crowdy) was supportive of what we were trying to do.

“The rabbi and church have been great neighbors … and fantastic people to work with over the years.”

McNeil wants to move forward with the future development that Crowdy had envisioned. That includes plans for an assisted living center near The Orchards and a town center area that would bring some retail and restaurant development along Bridge Road.

“Thanks to Rabbi Crowdy, we are in a position to do more and we have a good running start,” said McNeil. “I am hoping we can get away from grief and turn our attention to completing the work he started.”

Birdwatchers use binoculars to look out for birds during a prior Birding Festival at the Great Dismal Swamp National Wildlife... read more