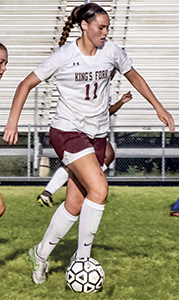 Montel, Nichols, Washburn, Vick, Wall and Bido made first team, while Summers and Blust made second.

Coach Mike Marston was pleased with the results.

“I couldn’t be any more proud of the team overall in how much they improved as a cohesive unit from the start to the end of the season,” he said.

Logan Montel is a senior captain and also the leading scorer this season for the Lady Bulldogs. Marston said Montel and Cydney Nichols were a pretty strong scoring duo throughout the year.

“Montel and Nichols formed a pretty dynamic scoring combination,” said Marston. “Both had over 20 goals and over 15 assists this season. Every team has problems defending them.”

Rebecca Washburn can be described as being King’s Forks most skilled midfielder, displaying excellent foot skills, and Alyssa Vick plays up to six different positions.

Marston mentioned how Vick helped the team out when Montel and Nichols were struggling through injuries.

“Alyssa helped us out a lot earlier in the season,” Marston said. “She gave us quality effort in multiple spots that allowed us to continue to play at a high level.”

Skylar Wall and Ashley Bido are defensive leaders on the team. Wall has been a defensive leader since her freshman year and is said to be the best one-on-one defender on the team. This is Bido’s first year playing center back, taking a lot of pressure off of Wall’s workload during the season.

Making second team were Paige Summers and Olivia Blust. Summers was named the team’s most improved player in 2015 and continues to work hard to improve her playing abilities.

“She really dedicated herself in the summer and over the offseason to get in tremendous physical condition.” Marston said. “She ran cross country and track and it translated into soccer.”

Blust is a sophomore. This is her first season playing high school soccer. She earned a starting position before the first game and brings energy to the game.

Coach Marston believes his team can get better and go farther than they did this season. Even though he had eight players receive awards, he feels that eight is not enough.

“Next year we can’t afford to cast any doubt,” he said. “Everyone who starts for us should be first or second team all-conference.”