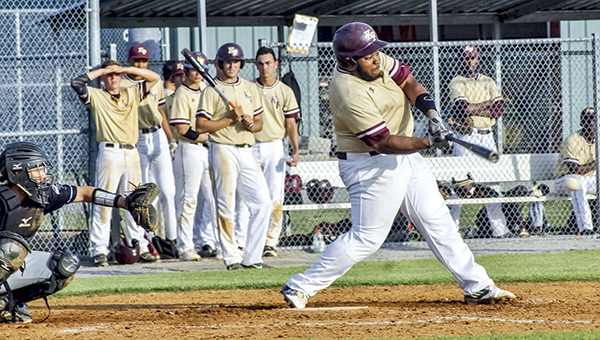 Josh Bush, Tim Gromkoski, Blake Sargent and Noah Floyd were the recipients of the awards. Bush and Gromkoski made first team, while Sargent and Floyd made second team.

Coach Robert Hedrick is proud of his players for receiving the awards but believes the team is stronger than individual accomplishments.

“I’m cool with it but in the end I want our team to be better, I don’t mind vouching for guys for individual stuff, but I want us as a team to be that good,” said Hedrick.

“Josh is very soft spoken, but when it comes to the field, he lets everybody know it’s time for business,” said Hedrick. “And Tim has had one of his best defensive years, at shortstop and second base. He did a phenomenal job.”

Gromkoski threw out around 60 percent of the base runners that tried to steal on him this season.

Sargent played first base and batted .422. Hedrick believed that Sargent had a chance to get first team.

Floyd was moved around a lot throughout the year as the coaching staff tried to figure out what position suited him best, but eventually he found his stride.

“It seemed like as the year went on, Noah got better and better,” Hedrick said. “He took a big step forward this season.”

Hedrick congratulated his players for their exploits this season, but his expectations are high for next year. He believes that his guys have the caliber to be a high performance unit even though they will be missing three seniors, one of which is Browne.

“We are going to miss our three seniors,” he said. “They are probably the three best kids I ever coached. Hopefully, what they have done has rubbed off on the younger players.”

Portsmouth police officers prepare to mount their motorcycles after escorting the team that delivered the Olympic Flame of Hope to... read more