Two members of the Lakeland High School boys’ soccer team have been named to the All-Conference second team for the season. 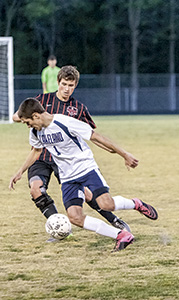 Adam Worley and Hunter Rawls are the Cavaliers’ representatives on the Conference 27 team.

Coach Austin Kulp believes that both Worley and Rawls deserved the accolades.

Worley is a forward for the team, and according to Kulp, he “was responsible for half of their offense.” He is skillful with the ball, good with both feet and is one of the captains on the team.

“Adam was an offensive threat the entire season,” Kulp said. “He is very hard to defend because of how quick he is.”

Rawls is the player that helps run the midfield.

“He can pass the ball, he can go forward when he wants too, he’s a great defender and also one of the captains on the team,” Kulp said.

Rawls’ height is also an advantage, the coach said. As one of the tallest players on the team, Rawls is able to the ball with his head easily.

Lakeland won three games this year, was an improvement over last year’s single win on the season. Kulp credits Worely and Rawls with helping to improve the Cavs’ record this time around.

“They are both huge for the team,” Kulp said. “They both play big in big moments, and their conference play this year was great.”

Having lost 13 seniors in 2015, Kulp said Worley’s and Rawls’ character was important to this year’s team development and had helped inspire their younger teammates who are just starting out.

“Their leadership has contributed to our younger players playing better,” he said. “They see how Adam and Hunter behave on and off the field and learn from them.”

Worley was a senior, and his graduation leaves a void in Lakeland’s offense. Kulp thinks he has boys on the team who can handle the job.

“Him graduating means that a lot of our offense will need to be picked up by younger players,” Kulp said. “Adam had 10 or 11 goals this year, so someone’s going to need to step up and fill that role.”

Kulp recognizes he is in a rebuilding process, but he is optimistic about the future.

“It’s definitely one of those rebuilding and retooling years,” he said. “I’m going to try to help build the program.”