Many people excel as students or athletes, but not many can boast that they are exceptional at both. Sarah Bowyer is one of the few. 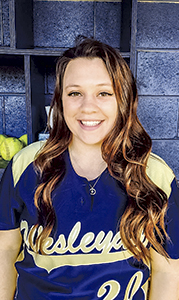 Bowyer, a rising junior at North Carolina Wesleyan College, was named to the 2015/16 USA South Academic All-Conference Team. The award recognizes student-athletes with a grade point average greater than 3.0. Bowyer was also named the outstanding student athlete of the 2015/16 softball team by her college’s athletic department.

“It feels like all my hard work paid off,” she said. “I put in the time and energy, and it feels good to be recognized for it.”

Bowyer graduated from Lakeland High School in 2014 as one of the top students in her class. She continued her excellence as a student and an athlete into college, where she has been named to the USA South Academic All-Conference Team in both years so far.

Bowyer plays catcher for the softball team, which finished third in its conference last season. She made 28 appearances last season with a batting average of .325, the fourth-highest on the team. However, those are not the most important statistics.

Bowyer finished the year with a 3.94 GPA, well above the cutoff for the Academic All-Conference Team. She said emphasizing academics is key to being a good student athlete.

“Not many people get in to the major leagues or the N.F.L.,” she said. “Academics is the way to succeed in real life.”

Bowyer is majoring in criminal justice, and she plans to attend law school.

In addition to her studies and talents as an athlete, she is involved with a number of clubs and societies on campus. She is president of the Taylor Crocker Honors Program and is involved in the Women’s Criminal Justice Coalition and the Phi Eta Sigma honor society.

“It’s important to be involved in more than one activity at a time,” she said. “It’s the key to being a well-rounded person.”

Sarah said she derived her work ethic and desire to better herself from her parents.

“I guess I’ve learned from my parents,” she said. “My mom just got her master’s degree, so they show me to keep striving.”

Bowyer said she plans on majoring in criminal justice and attending law school, with the goal of eventually working for the FBI.

“I did my first ride along with police and I loved it,” she said.

While back home for the summer, Sarah Bowyer volunteers her skills as a softball player to help coach youth softball teams.

She said she plans to continue playing softball for the foreseeable future, with eventual plans to play on the national stage.

“I want to eventually try out for the U.S. Olympic team,” she said. “But who knows, that’s a long way off.”

For now, she can celebrate, knowing she is recognized for her efforts on and off the softball diamond.