KF warms up at ODU 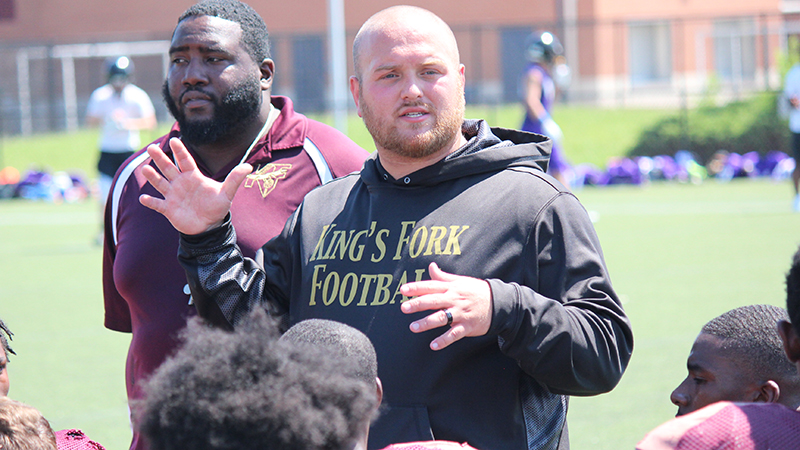 Coach Scottie Littles talks to his team during a camp at Old Dominion University last week. Littles will have his inaugural season with the King’s Fork High School football team this year.

With football season right around the corner, King’s Fork High School’s football team got a taste of the summer heat and prepared for gridiron action by participating last week in Old Dominion University’s Team Camp.

For years, the Bulldogs have made the trip to Norfolk to gear up for another season. However, the importance may be magnified a bit with a new head coach in Scottie Littles taking over for Joe Jones, who left to go to Ocean Lakes.

“I think it’s the live reps that help the most,” Little said. “With the passing game, everybody can line up in shorts, be able to run routes and catch the ball. It’s hard to get a real look when you’re not in pads, which is why we stress coming to this camp. Now they’re actually playing football.”

“We’re a spread team, but we want to be physical in our run game,” he added. “Getting the guys together and allowing them to be a family and team means a lot. They’re excited to hit somebody and go against a different color.”

Over the three-day stretch, the Bulldogs were able to get in work and compete against teams from around and outside the area while using ODU’s facilities to teach specific skills and install plays. Despite missing some players attending summer school, the coaching staff was able to get a better idea of what to look for when the season gets under way in a month.

Robinson, who checks in at 6 feet, 4 inches and 320 pounds, transferred from Maryland. Mitchell is already 6 feet, 2 inches and 260 pounds and was one of the most aggressive defensive linemen at the entire camp.

“He’s going to be a stud for us,” Littles said of the incoming ninth-grader.

Two other things the Bulldogs have in their favor are the depth they have on the bench, as well as the addition of new line coach Pete Gale, who coached at Great Bridge for several seasons and led the Wildcats to the playoffs on six occasions.

It’ll be a collective effort filling the shoes of all-time leading rusher Deshaun Wethington, now at Towson, though rising junior Darran Butts has plenty of promise.

“Overall, he’s our most explosive and probably our best football player,” Littles said.

The starting quarterback position figures to be a battle between senior John Woods and junior Justin German. With German absent during the camp, Woods received most of the snaps under center, but both bring varying qualities to the table.

“John is more of the pure pocket guy, whereas Justin is the more athletic one you can do things with in the run game,” Littles said. “We’ve also got some length on the edge at receiver.”

At receiver, they’ll be counting on a couple of basketball players in Raemaad Wright and Sam Dunn, as well as T.J. Hart, a rising junior who will also hold a key role on defense at safety.

“Not only is Chris a great football player, he’s an amazing person,” Little said. “He’s 14 years old, 5 feet, 11 inches, 175 pounds and getting recruited by just about everybody so far. He’s special.”

“Daveion’s not the biggest kid, but he’s got all dog in him, and he’s going to fight. He’s our Tyrann Mathieu,” Littles said in reference to the 10th-grader’s favorite player, who plays for the NFL’s Arizona Cardinals.

Littles’ coaching debut at King’s Fork will be at home against Smithfield on Aug. 26.