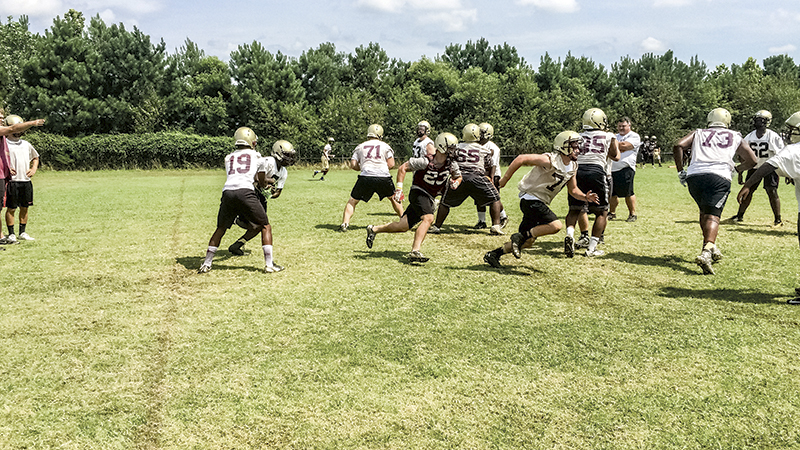 King’s Fork High School drilled plays in preparation for the new season. The Bulldogs spent the morning practicing offense and defense before tackling special teams in the afternoon.

As the football season gets set to kick off, high school teams engage in grueling practices in the summer heat — usually two times each day.

While the sessions are beneficial for the teams, coaches, trainers and players have to take extra care to avoid health problems brought on by the punishing heat. Despite the possible health problems, Suffolk’s coaches say the practices build team character and ability.

“Two-a-days are very tough,” said David Coccoli, head coach of Nansemond River High School. “The players have got to have self-motivation to make it through.” 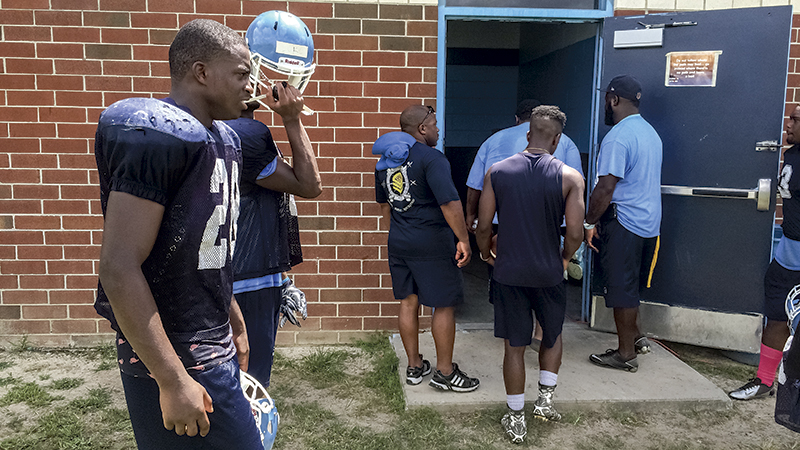 Lakeland High School’s coaches and players take a break to hydrate after a long day of practice.

It does not sound like an enviable schedule, but Suffolk’s football coaches say the tough work is necessary to get in shape for the new season.

Scottie Littles, the head coach at King’s Fork High School, said his team needs the practices in order to reach their goals for this season.

“The players know that going five-and-five is a disappointment,” he said. “We want to be top of the district, so we need to work hard out there.” 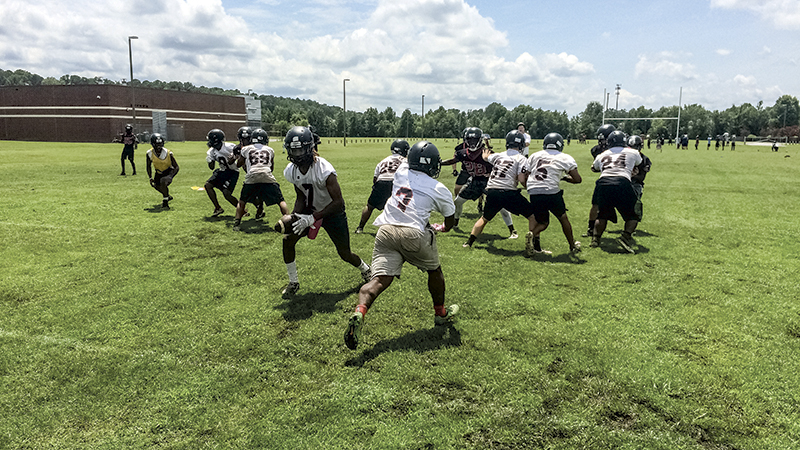 Nansemond River High School’s football team ran plays at practice, despite the hot and muddy conditions. Coach David Coccoli kept his players hydrated with water stations, and even served the players water through their facemasks to make sure they did not overheat.

Coccoli said his team needs the preparation to stay at the same level as their competitors.

“Everybody else is doing the two-a-days, so we have to do it, too,” he said.

Despite the benefits of the practices in terms of preparation for the season, doctors say that continuous exercise in the heat can be dangerous for one’s health. 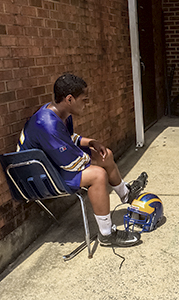 Nansemond-Suffolk Academy’s Jordan Houston take a break to sit in the shade after their two early practices. The Saints’ new football coach Michael Biehl moved practices to begin early in the morning to beat the heat.

The Virginia High School League publishes guidelines for summer practices. The VHSL says that football teams cannot practice in full pads for the first five days. In addition, twice-daily practices cannot total more than five hours on the field, and a one-hour recovery period has to be held between the two practices. The VHSL also recommends for the first week of practices to be lighter so the players can get used to the conditions.

“My advice is to make sure you consume plenty of fluids and get good nutrition during your breaks,” Masterton said.

Kevin Knight, Lakeland’s head football coach, said the twice-daily practices are good for building spirit among the team, even though they can be tough on their bodies.

“It’s a positive thing,” he said. “They’re together basically from 8 until 3, so helps them work together as a team.”

In order to keep the players from overheating, the team spends much of the day inside, meeting with coaches, Knight said.

“We do a lot of the work together in the classroom,” he said, “that way, when we’re out on the field, we can work more efficiently.”

Nansemond-Suffolk Academy’s football team has a different solution for keeping cool during the summer sessions. The team’s new coach Michael Biehl starts the training at 6:30 a.m., allowing the team to finish both their practices by noon.

“We’re doing it to beat the heat,” he said. “There’s no predicting how hot it will be. You don’t know how many practices you’ll lose to heat.”

Because this is Biehl’s first season as NSA’s head coach, the team cannot afford to miss any practices, he said.

“This schedule means we can get the first practice in guaranteed,” he said.

NSA junior Jordan Houston said even though the training schedule forces him to wake up early, he prefers it to the alternative.

“It’s definitely better and safer to practice when it’s less hot,” he said. “We get more done.”

The main problem that coaches face during the pre-season practices is physical exhaustion, but mental tiredness is a possibility, too, when players practice for nearly eight hours a day.

Littles said the players do not get burned out, because of their passion for the game.

“The kids are all hungry and they want to be great,” he said. “It all goes back to the culture of the off-season. When the lifts in the off-season are mandatory, they know what to expect and they get their heads in the game when the practices start.”