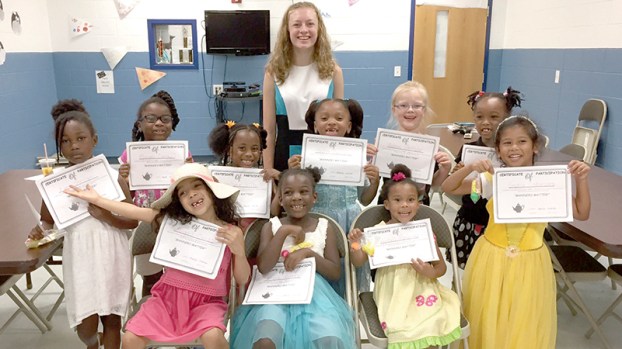 A Suffolk teenager began her own service project to stress the importance of etiquette in young girls.

Jacquelyn Hendricks, a Girl Scout from Troop 5292 in Driver, was working toward her Gold Award, the highest award possible for a Girl Scout. As part of the process, she had to conduct a sustainable service project, which brought about Manners Matter.

“I chose this as my project, because I really feel members of society are losing touch with manners and respect,” Hendricks said. “I witness it daily, and I wanted to create a program to improve this is in our community.”

Hendricks orchestrated her program with the Northern Shores and Creekside recreation centers. She had more than 20 students enroll for the program.

From July 25 to 29, she taught 90-minute sessions at one location in the morning and the other in the afternoon. She taught teamwork and sportsmanship, phone and social media etiquette, table manners and speech etiquette.

However, Hendricks broke the mold of traditional teaching and made the learning sessions interactive.

“It was more of a discussion, and there was role playing,” said Jacquelyn’s mother, Cheryl.

The students ranged from kindergarten to sixth grade. Hendricks quickly learned she had to adjust, based on varying attention spans and abilities.

“What works for one group may not working for the other,” she said.

The program concluded with a formal dinner, allowing the girls to showcase for their parents what they had learned during the course of the week. Hendricks coordinated with a local BJ’s and Farm Fresh to donate desserts, cream, sugar and tea packets for the dinner.

“I think this impacted their lives a little,” Hendricks said.

During the program, Hendricks recorded herself teaching to facilitate the sustainability factor of her project.

She is in the process of editing her videos, and she will upload them to YouTube in the coming weeks. She also wrote her program curriculum for local schools and organizations to use for their respective programs.

“We have instilled respect and manners in her,” her mother said. “She’s pretty motivated and has a lot of leadership qualities.”

A Suffolk resident with ties to a former enslaved man who worked on the Dismal Swamp State Park Canal in... read more