All four teams in action 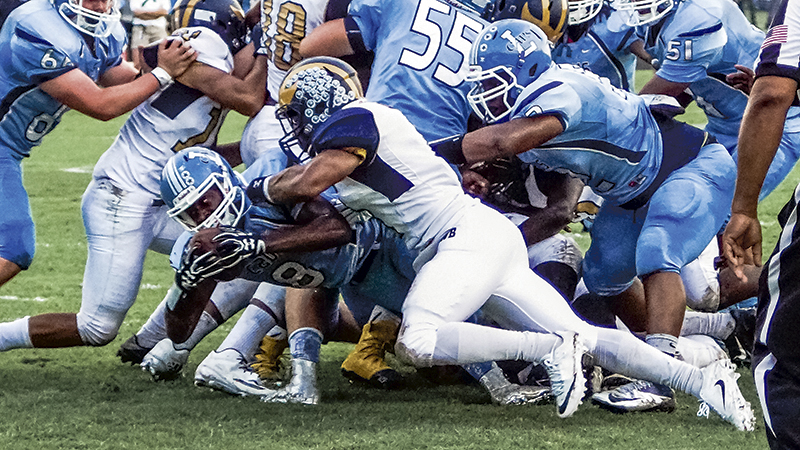 Demetrius McKinney stretches for extra yards against Western Branch. Lakeland will be at Oscar Smith High School this week, looking to improve to 3-0.
Danny Haymond photo

After winning their first two games of the season, week four will bring arguably the Cavaliers’ toughest opponent.

Oscar Smith High School is coming off a bye week and has only played one district match so far, which was a win against Nansemond River High School. Lakeland is looking forward to the challenge.

“Our preparation week has been one of the best we have had so far,” coach Kevin Knight said. “Guys are focused, we are playing fast and practicing fast, and I like our energy.”

Last year, Oscar Smith defeated the Cavaliers 48-0. However, before that game Lakeland was 0-2. Now on a two-game win streak, the Cavs hope to ride their momentum into Oscar Smith and compete hard. They want to keep it simple by continuing to play Lakeland football and execute the game plan.

Though the Cavs will be looked at as underdogs they believe in themselves and their ability.

“We have to stay poised and stay discipline and remain focused and excel on our assignments,” senior Garrett Whitley. “We believe in each other from coaches to the players. Our goal is to go out there and play hard-nosed Lakeland football.”

Any time a team gets a chance to compete against a team of Oscar Smith’s caliber, it adds extra motivation. The Cavs want to rely on the rushing game and make passing plays when needed. Damontra Milteer has 366 rushing yards in two games.

Defensively, the Cavaliers have only allowed 15 points through two games, with no passing touchdowns. Oscar Smith will be a tough challenge, but the Cavs don’t want to think about who they are playing.

“We want to go out there and enjoy the moment,” Knight said. “This is an opportunity for the guys to really make a name for themselves. Go out there play ball and have fun. We feel we can match up with anybody. Our guys are confident.”

The Cavaliers will be on the road for the second time in three games. In week one, they defeated Wilson on the road, so the Cavs are prepared for a tough road environment.

The Bulldogs are back at home this week after a win at Hickory High School last Friday. Indian River High School will be the opponent coming to town, and they also won last week with a 49-12 win over Great Bridge High School. King’s Fork has been practicing well this week, and coach Scottie Littles’ weekly motto remains.

“This is a good opponent,” Littles said. “As I say every week, we cannot go 10-0 without going 3-0. They are a very athletic football team, and they have one of the best players in the country. It’s a big game because it is the next game.”

Devon Hunter, whom Littles was referencing, is a four-star nationally ranked player, and Indian River likes to do a lot with him. Last week, Hunter scored three total touchdowns, with one being a kickoff return for a touchdown.

“They do a lot with him to try to get him the ball,” Littles said. “Our kids are going to have to do a good job containing him. Special teams will be a point of emphasis. We have to limit opportunities.”

The Braves run a similar offense to King’s Fork. Littles feels whichever team makes the most explosive plays will come out with the victory.

“We have to execute and play fast and physical,” quarterback Justin German said. “They are a good team, but I believe we can come out with a win, because we definitely have the talent to do so.”

German has been making consistent progress since his first game. He totaled 267 yards last week. Offensively, the Bulldogs feel they have enough weapons to improve to 3-0.

“We want to continue to improve our tempo,” running back Darran Butts said. “Offensively, we have different guys who can create problems. From Justin and me to other guys like Cherrod Joe, Jamison Long, Sam Dunn and Raymond Right. Our offensive line makes it all possible.”

“If we do our job and play sound football, we will be fine,” Littles said. “This game will be a good challenge for us.”

The Bulldogs are at home against Indian River 7 p.m. Sept. 16.

The Saints will be at home for a third straight week as North Cross will try to come in and stay undefeated. NSA got their first win of the season last week against Christchurch with a 36-14 victory. North Cross won last week, 53-7, and in their last two games have outscored their opponents 103-7.

“Anytime you come off a win, you have to refocus for the next task,” coach Mike Biehl said. “North Cross is coming in, and we have to make it difficult for them to do what they want to do.”

North Cross’s offense is centered mostly around throwing the ball, which means NSA will need to do a good job forcing turnovers and limiting big plays. The Raiders did have two players who rushed more than 100 yards last week.

“We have to be really physical with their receivers,” Biehl said. “From the time the ball is snapped until the end of the play, we have to be the tougher unit. Defensively, we have to stay locked in.”

Keshaun Moore ran for 118 yards last week, and Shaun Faulk added 97 yards and two touchdowns. The Saints put up 278 rushing yards and limited their own turnovers.

“We need to execute the game plan we have,” Moore said. “I believe we are going to come out with a chip on our shoulder to try to limit their offense. I think people expect us to get blown out.”

NSA wants to build momentum off of their first win. They want to defend their home field while also being the team to give the Raiders their first loss.

“We believe we are good enough to play against anyone,” all-state player Erek Smith said. “It’s critical for us to win at home in front of our fans and take advantage of this opportunity.”

“The bye week was well needed,” standout JeVon Waller said. “It gave the team time off of the game and some recovery time and to refocus ourselves for the next game. A big win this week could set us back in motion.”

Deep Creek will be the Warriors’ first road game of the year.

“It is vital that we come out and match their intensity,” coach David Coccoli said. “Everyone is going to be excited to play.”

“We just have to go out and execute our assignments,” Henry Moreno said. “Do as we have been coached to do, and we will come out with the victory.”