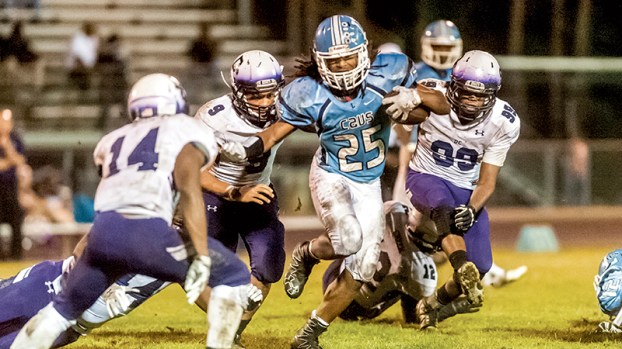 After beating Great Bridge on Monday in a game rescheduled because of the previous week’s storms, the Cavaliers (4-1) had to make a quick turnaround to prepare for Deep Creek.

LHS didn’t play its best game Friday night, but the resiliency they showed to hang on to the win went a long way.

“It wasn’t the prettiest win, but I’m proud of my guys,” coach Kevin Knight said. “Two games in a matter of four days is tough on their bodies. We pulled through and got it done tonight.”

At halftime, the Cavs were up 14-7 against the Hornets, and they’d added another touchdown to the margin by the end of the third.

Whereas last Monday’s game was a bit of a blowout, Friday’s night game was something of a dogfight. The Cavs are starting to mesh a little better every game.

“It was a mental week this week,” Knight said. “We knew what we had to go out there and do and we did it. Everyone is believing in each other, from players to coaches.”

“Our motto is to finish strong,” senior Garrett Whitley said. “That’s what we did Friday night, and it paid off in our favor.”

Damontra Milteer led the way for the Cavs again, rushing for 169 yards and three touchdowns. In both games last week, he broke 150 yards.

“Coach had us ready to play,” Milteer said. “We knew we had a short week, and we prepared accordingly. I give credit to him.”

“It feels great to win an ugly game,” Whitley said. “I’m blessed to be around the best running back in the area.”

Even though the Cavs have only one loss this season, they still don’t believe they’ve played their best football in all three phases yet. Yet they seem to be improving steadily, a fact that is likely troubling for their opponents. Now at 4-1, the Cavs are enjoying their best start in recent years.

Lakeland travels to nearby King’s Fork for a crosstown rivalry at 7 p.m. Friday.