Beale all about making her team better 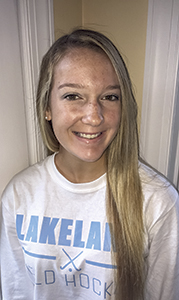 Sydney Beale was voted the Duke Automotive-Suffolk News-Herald Player of the Week after a two-goal, five-assist combined performance.

Sydney Beale is a sophomore field hockey player for the Lady Cavs. She is a jack-of-all-trades for her team as she is moved in several positions to give her team the best chance to be successful. Beale has a knack for scoring while also setting up teammates up for chances to score as well.

Her coach as well her teammates have confidence in her, and that has helped her progress from her freshman year to her sophomore year.

“I feel like I’ve gotten better with my stick skills,” Beale said of her progress. “I think about what I’m going to do with the ball and what I’m going to do next. My teammates and coaches have confidence in me, which allows me to go out there and do what I need to do.”

Lady Cavs coach Cortney Parker knows how special of a player Beale is and knows she can become even better over her next two years.

“Sydney is an incredibly hard worker not only in field hockey but everything she does,” Parker said of Beale. “She has a passion for the game that drives her to be better every time she steps on the field. I have played her at several different positions, and she does extremely well anywhere I need her she’s a team player. I look forward to seeing her develop over the next couple of years.”

Nobody puts more pressure on Beale than Beale herself. She wants to work hard and improve. At times, she even gets frustrated with herself if she feels she is not playing at the top of her game. In those cases, she just takes a deep breath and relaxes, and she reminds herself that it’s OK to play imperfectly, as long as she is getting better.

She is motivated by the will to help her team in any way she can. Her teammates see that and know that she will always be in the right spot during games.

“I love Sydney!” Beale’s teammate Kendall Lewis said. “We play well together when we are on the field. She’s always in the right spot on the field. She has a lot of skill as a sophomore, and she is super fast.”

Her family inspires her to do the best she can. The family comes to the game to support not only Sydney but also her older sister Haley, who is a senior on the team. Though Sydney and her sister play different positions, she has learned about good leadership and being a good teammate from her.

Academics are an important part of Beale’s success. She loves field hockey but knows it isn’t possible for her to be as successful as she is if she doesn’t keep her grades up. In her spare time, she enjoys watching television.

Beale and the LHS field hockey team will be in action again at 4:30 p.m. Monday at Heritage High School.