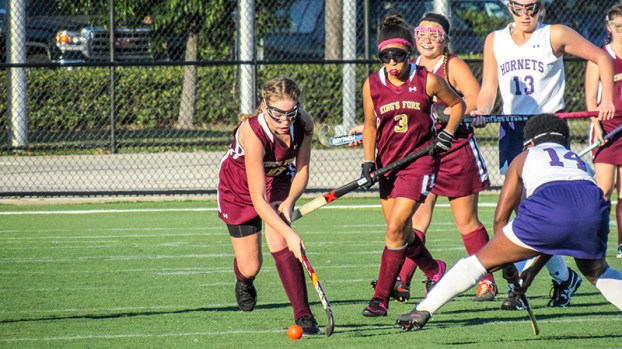 Isabella Gay moves the ball up the field for the Lady Bulldogs. Gay was a second-team all-conference performer in 2016.

Ashley Skinner recently moved from being the head field hockey coach at Nansemond-Suffolk Academy to her new opportunity at King’s Fork High School.

The Lady Bulldogs field hockey team will be under new direction this year. Coach Ashley Skinner is the new head coach for the field hockey team and is looking forward to starting a new journey. She is grateful for her time at NSA and knows she will be leaving behind a good team.

“I’m excited to have gotten out here and be able to train a whole new group of girls,” Skinner said of her new team. “I’m excited to see what we do against other teams and just helping these young players develop.”

In 2016, King’s Fork’s season ended in the first round of the Conference 17 tournament. This year, the Lady Bulldogs return a solid core of players for Skinner to work with. So far, the transition has been good, with both coach and players learning from each other. Both express optimism about the season.

“I have a good feeling about the team this year,” Lady Bulldog returner Isabella Gay said. “Coach Skinner has introduced some new changes to us which have made us strong both offensively and defensively. She has a lot of faith in us and has really pushed us to do our best.”

Gay is one piece of a strong core that is expected to contribute. Anaya Godfrey, Jaiden Combs and Amber Suits are all players who can have strong seasons under the new coach. Suits was a first-team all-conference defender in 2017. Gay and Godfrey were both second-team all-conference defenders. Gay was out most of the 2016 season with a concussion, but she is confident about her health this year. Suits and Godfrey will be the team captains for this season. King’s Fork has depth as well and those players were also considered for all-conference awards.

Godfrey mentioned that the team has been building a bond as strong as ever. Due to the Lady Bulldogs not having a coach until Skinner was hired, they used that time to grow closer as a team. The all-conference defender thinks the bonds will work wonders.

“We have a very experienced group,” Gay said. “Almost all of us having been playing together for the last three years. We have formed a bond that has brought us together and has made us stronger both on and off the field.”

King’s Fork will officially get its season under way Monday against Southampton High School. Skinner is looking forward to seeing her team unify for one goal Monday.

“I’ve watched the girls work hard for a couple of weeks now,” Skinner said. “I’m just excited to see them finally get an opportunity to get out there.”

Volleyball officially gets under way next week, and the Lady Warriors are looking forward to facing competition under their new... read more