The Driver community of Suffolk is known for its eclectic shops, deep-rooted community and a popular fall festival that draws thousands annually.

When asked what makes their small part of Suffolk unique, residents and store owners described it as a close-knit community that’s held together against obstacles and loss.

“Everyone knows everyone,” said Driver resident Cynthia Parker. “If you have a cold, it seems like the whole neighborhood finds out.”

Lifelong residents make for an interesting mix of characters that cultivate a unique charm in every shop. 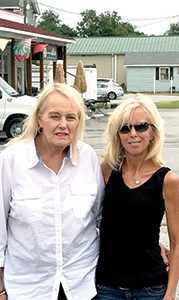 Holly Hoffler, owner of Hollydays floral design business, and Cynthia Parker have been residents in the Driver of community of Suffolk for decades. The two stand at the former site of the Driver Variety Store owned by Craig Parker, which was destroyed by a tornado in 2008.

Ken Parsons, owner of the Knot Hole station, makes wood furniture in a small building across the street. He also organizes a community cornhole league that fills his parking lot with music and friendly conversation weekly.

His mother, Joan Mayo, can be seen in the store greeting customers and running things with more than four decades of experience. She turned 81 in July.

“I’m still working, and I’m not going to stop until I can’t do it no more,” Mayo said.

Parker also highlighted the fortitude of the community despite hardships over the years.

In 2005, when Virginia Department of Transportation closed the Kings Highway Bridge, the village lost an easy route for thousands of commuters.

Losing that bridge forced a longer commute for those traveling to Driver, which ended up hurting businesses, Parker said.

“It was like night and day,” she said. “Once it shut, they had no way to come here.”

Rio Grande Traders owner Ronnie Gould said he lost half of his average annual business when the bridge closed, and Murphy said the same about her own store. Both, however, remain in business.

“We’ve had a struggle keeping things going, but we have good customers that have stayed with us,” she said.

Another setback came when a tornado tore through the village in 2008. That storm destroyed the Driver Variety Store, a cherished shop that had been filled with hunting supplies, hardware, motorcycle wear and other odds and ends.

The store was owned by Cynthia Parker’s husband Craig Parker. His sister, Holly Hoffler, called him the unofficial mayor of Suffolk. He would have regulars come by his store just for friendly conversation daily, and when the store was gone, some simply pitched a tent on the empty parking lot where the store once stood and kept conversations going, Hoffler said.

Craig passed away in December 2015 at age 66 after a nine-year battle with cancer, and that loss continues to be felt by many.

“I run into people every day that say they miss the store, and they miss Craig,” Hoffler said.

Parker lives on through friends and family, his book “Some Are Dead and Some Are Living” about the town’s history, and Driver Days. He founded the festival in honor of his sister Sherri, who died in a hit-and-run accident in 1993.

“He started Driver Days as a way to help my parents heal and bring the community together,” Hoffler said.

Thousands gathered to the typically quiet town for the festival in October 2016. Proceeds supported organizations such as Children’s Hospital of the King’s Daughters and the Driver Volunteer Fire Department.

Bluegrass tunes were a soundtrack for friends and family reuniting. Hoffler said Craig would be happy with what the festival has become.

“He would be happy with how many people are coming to Driver,” she said.

The Salvation Army Suffolk Corps hopes to “pin down homelessness” with a wrestling-themed fundraiser this week. This is the third... read more